The G500 took off from the Savannah-Hilton Head International Airport at 9:47 a.m. on Saturday, Feb. 20, with Flight Test pilots Eric Holmberg and Brian Dickerson at the controls. Flight Test engineers Dominic Pompeo and Mark Mondt provided onboard test and data analysis. 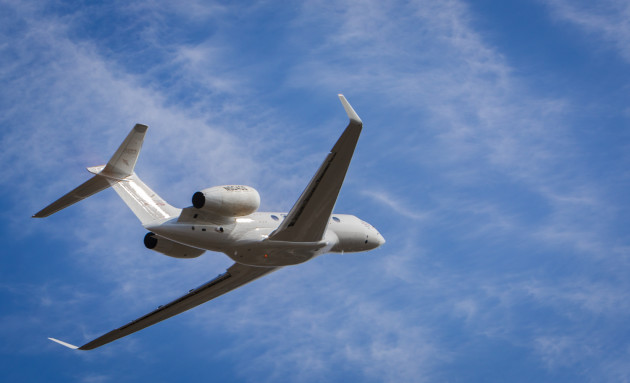 The aircraft climbed to a maximum altitude of 51,000 feet/15,545 meters and reached a maximum airspeed of 340 KCAS/Mach 0.925. During the 3-hour and 17-minute flight, the crew exercised all primary flight control systems, performed functional checks of air data and cabin pressurization systems and completed a series of engine performance measures. The aircraft landed back in Savannah at 1:04 p.m. local time. 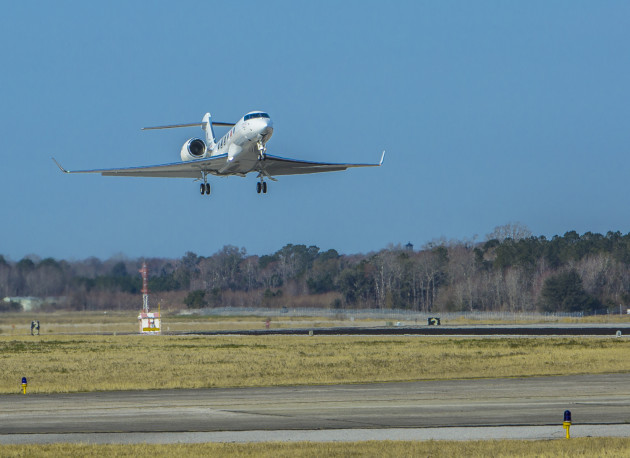 “The first flight of T4 speaks to the growing maturity of the G500 flight-test program and the significant development we completed before we even launched flight test in May 2015,” said Mark Burns, president, Gulfstream. “To have four first flights and more than 580 flight hours in just nine months is quite an accomplishment.”

Continue reading about the G500 on gulfstreamnews.com>>

For evidence of the soft demand for large-cabin business jets, look no further than Bombardier , where the market segment slump seems to be especially pronounced.

Based on recent guidance from management, the company expects to deliver 150 business jets this year, down about 25% from total deliveries in 2015. Some industry analysts estimate that at least half of the decline is due to lower Global 5000/6000 production rates as the large-cabin aircraft fall from 73 to 50 aircraft in 2016. Meanwhile, the first flight of the highly anticipated Global 7000 is still scheduled for later this year. 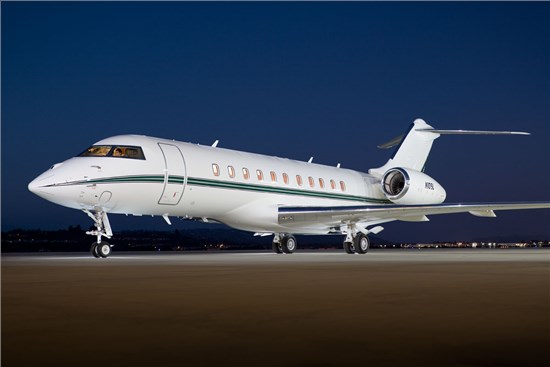 On a more encouraging note, the Bombardier Business Jet team can take some comfort in the fact that production of Challenger 350 business aircraft in 2016 is relatively stable. Bombardier expects to build about 60 of the super-midsize jets, compared to 68 last year. 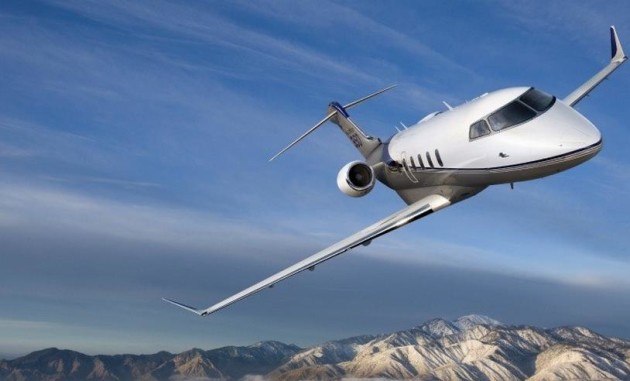 Singapore Air Show: “On time” Gulfstream says it is benefiting from competitors’ delays

Upbeat Gulfstream says it is benefiting from delays to its rivals’ new long-range, large-cabin business jet programs, while its developmental duo is still on schedule.

Both Bombardier’s Global 7000 and 8000, and Dassault’s 5X have been hit by hitches that have pushed back likely certification by up to two years.

“We have a very long history of delivering on our promises,” Gulfstream’s senior vice-president, worldwide sales and marketing Scott Neal said at the show, citing the on-time arrival of its previous programmes, the G550 and G650/G650ER. “What we deliver matches what we say. It is a differentiator that helps us win business.”

Continue reading about Gulfstream on Flightglobal.com>>

Throughout 2015, the large-cabin, long-range business jet segment showed some serious signs of weakness in light of slowing demand from an emerging markets slowdown and reduced orders from oil-producing countries, according to Flightglobal’s Ascend consultancy. This also triggered a slump in the residual values of many established models in this niche sector, it says.

In its latest ViewPoint newsletter, Ascend highlights a 16% year-on-year decline in the market value of the Gulfstream G550, and a similar fall in value during the same period of its smaller, large-cabin stablemate the G450. 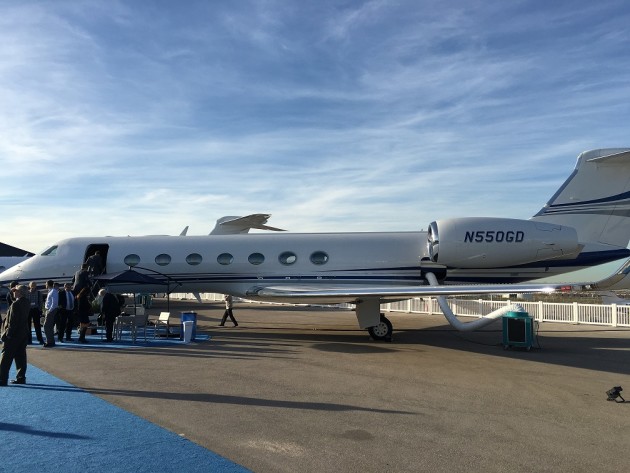 In comparison, Bombardier‘s Challenger 604 performed relatively well, with values falling by only 6% in 2015, compared with the previous 12 months, but its newer sibling, the 605, “saw an 18% hit,” says Hall.

“The mixed 2015 year-end numbers among the various sectors reflect a market characterized by plummeting energy sector revenue, economic uncertainty, and currency fluctuations in key GA markets such as Brazil, Europe, Russia, and China,” GAMA President and CEO Pete Bunce said. “Given the relative strength of the North American GA market, it is particularly important that the U.S. Congress proceed quickly to pass an FAA reauthorization bill that contains certification streamlining and other regulatory reforms that allow manufacturers and repair/overhaul organizations to deliver products more efficiently and make the FAA workforce more productive.”

“In fact, with both the U.S. and Europe looking to revise the rules governing their leading safety authorities, we are at a unique moment that brings with it opportunities and challenges in areas such as leveraging resources, certification efficiency, and better regulation for GA,” Bunce continued. “As a global association, GAMA will continue to work for more effective and efficient regulatory systems worldwide that improve safety and ensure manufacturers, repair and overhaul centers, and our supply chain can get their products into customers’ hands without delay.”

This report was updated for Bombardier year-end results on February 17, 2016. The amended report can be found online at:
https://www.gama.aero/media-center/industry-facts-and-statistics/shipment…

“We are thrilled to offer the Citation Latitude to our European customers,” said Kriya Shortt, senior vice president, Sales and Marketing. “This aircraft is ideally suited for this market and can provide customers non-stop access to key destinations throughout the continent as well as North Africa and the Middle East. Customer input was a key driver in the development of the Latitude, which brings the amenities of large-cabin aircraft at a midsize acquisition price and best-in-class operating costs. 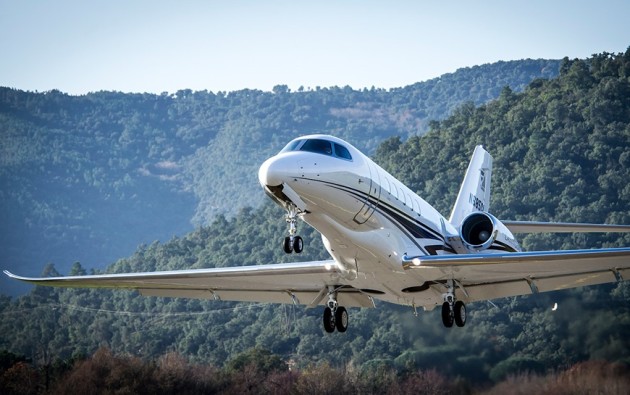 With a maximum range of 5,278 kilometers (2,850 nautical miles), the Latitude can easily fly non-stop from locations throughout Europe such as London to St. John’s or Lisbon to Moscow. It also recently received certification to operate into and out of La Mole Airport – a popular European vacation destination in St. Tropez, France. The Latitude joins a short list of aircraft able to operate at La Mole, which requires this special authorization due to the strict aircraft performance requirements, dense terrain and heavy airport traffic at the airport.

Continue reading about the Cessna Citation Latitude on txtav.com>>