Cirrus Aircraft announced yesterday that it has secured funding to complete the composite single-engine Vision SF50 jet from company owner China Aviation Industry General Aircraft (Caiga). Development of the single-engine Vision jet slowed during the recession. When Caiga purchased Cirrus for an estimated $210 million last June, the company said that development of the Vision jet would continue. The Vision proof-of-concept prototype first flew on July 3, 2008, powered by a 1,900-pound-thrust Williams International FJ33. Caiga’s commitment to certifying the Vision jet means that first deliveries should take place in 2015, according to Cirrus. The company had 179 job openings, including many engineers, listed on its website at press time, and plans are to build the jet at Cirrus facilities in Duluth, Minn., and Grand Forks, N.D. Cirrus is holding the price of the Vision jet at $1.72 million until June 30, after which it climbs to $1.96 million. The jet will carry five to seven passengers flying at up to 300 knots and 28,000 feet. “We see the finish line and we have the means and the capability to get there,” said Cirrus CEO and co-founder Dale Klapmeier. 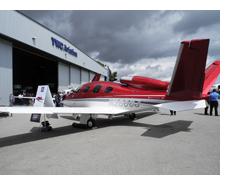