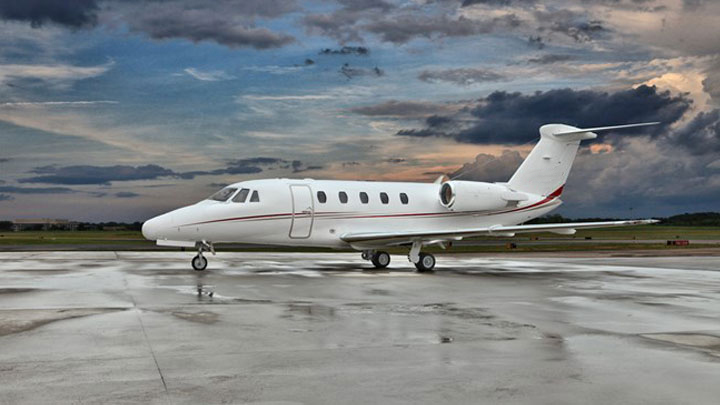 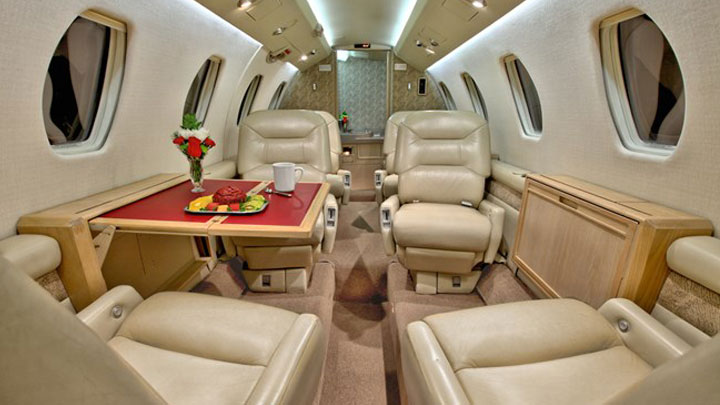 The Cessna Citation III is in the mid-sized jet category. Since this popular business jet charter came out, the Citation III (CE-650) mid-jet offered versatility and reliability. The interior of Citation III is designed to resemble a larger, more luxurious private jet. Soft overhead lighting and strategically placed windows create an airy, spacious interior. There are 61 cubic feet of baggage space.

The cabin is five feet high and has a volume of 438 cubic feet; the spacious interior of this business jet charter can accommodate up to 8-9 passengers while at the same time providing a generous baggage compartment. There is an available 61 cubic feet of baggage space, making it convenient for all business jet charters across the country. Best of all, travel in this midsize private jet charter is tranquil due to its compliance with the FAR part 36 noise standards.

Citation III features two Honeywell TFE731-3B-100S jet engines, which deliver a smooth and swift flight at a generous range. The mid-range jet was designed for optimal speed as the body utilizes lightweight composites wherever possible and smooth, bonded metal surfaces to cut down on drag. This corporate jet climbs quickly to its flight level of 43,000 feet, where it can cruise at a maximum speed of .81 to .83 Mach (468 knots). Its maximum range with four passengers is 2,920 miles (2,054 nautical miles). With all the standard amenities and a full-style lavatory, model III has all the comfort and conveniences its passengers require. You can charter Citation III and Citation VII  from JetOptions.

Citation III is the third-generation version of the Citation first introduced in 1983. This model can seat up to nine passengers, and Cessna continued to build this aircraft for the next decade. A stretch variant of Citation III was slated for later production but did not materialize. Instead, Cessna focused on increasing its performance and boosting its thrust engines. It also added additional features, such as an optionally-available RVSM kit.

Citation III is a fast jet designed to reach its destinations quickly. It also has a high-end cabin that can accommodate up to nine passengers. Citation III’s cabin features a spacious, fully enclosed lavatory. It has a sizeable 60-cubic-foot baggage compartment, and a door on the left side allows easy access for passengers. Its avionics suite included a Sperry/Honeywell SPZ-650 integrated flight director/autopilot, Collins Pro Line II radios, and Honeywell Primus 300L radar.
Citation III was the first aircraft of the model 650 series. They were designed for maximum speed with lightweight composites, smooth surfaces, and a T-Tail. Its performance also made it the fastest aircraft of its class. It also set records flying from Gander, Newfoundland, to Paris, France, a distance of 2,054 nautical miles.

The Citation III was the first mid-size business twinjet and marked a significant step forward for the Cessna Citation line. Its swept supercritical wing and T-tail combined with two Honeywell TFE731-3B-100S turbofans gave it an impressive speed.