Flight Marks Milestone Toward Entry into Service in 2015

Honda Aircraft Company announced on Friday that the first production HondaJet achieved its initial flight, marking another milestone toward aircraft certification and entry into service in 2015. The event took place at the company’s world headquarters in Greensboro, North Carolina. 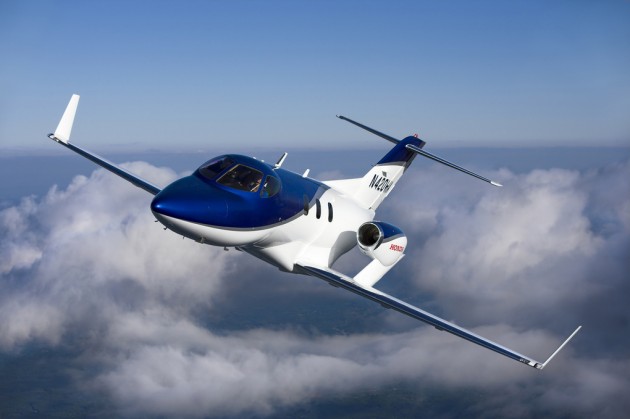 “With this first flight, the HondaJet program has entered the next exciting phase as we prepare for delivery,” said Honda Aircraft Company President and CEO Michimasa Fujino. “Today’s celebration is the culmination of extensive engineering and production efforts, and this is an important achievement in bringing the world’s most advanced light jet to market.”

The first production aircraft lifted off from the Piedmont Triad International Airport (KGSO) at 10:18 a.m. Eastern Daylight Time. During the 84-minute flight, the aircraft climbed to 15,500 feet and reached a speed of 348 Knots True Airspeed (KTAS). Following a smooth landing, the aircraft and its crew were greeted by more than 1,000 Honda Aircraft team members to commemorate the milestone.

This aircraft is finished in the new signature HondaJet paint scheme in a deep green pearl with a gold stripe. The new color introduction is in addition to four exterior color options available to customers, which also include silver, red, yellow and blue.

Aircraft production continues its steady pace in advance of entry into service. This steady build-up supports the company’s objective to have aircraft ready for delivery immediately after Federal Aviation Administration type certification is achieved. The HondaJet will be single-pilot certified and is currently offered for sale in North America and Europe through the HondaJet dealer network.