The FAA continues to investigate why the main entry door separated and fell from a Challenger 601-3R–registered as N207JB and owned by Medcp [sic] Aviation–as it was climbing through 3,000 feet after taking off from Opa-Locka (Fla.) Airport on Wednesday afternoon. According to an FAA preliminary report, “the door separated…under unknown circumstances.” The twinjet’s two crewmembers did not sustain any injuries; there were no passengers on board at the time. Just two minutes after departing Opa-Locka at about 3:45 p.m. for what appears to be a 20-minute repositioning flight to Pompano Beach (Fla.) Airpark, the crew declared an emergency after losing the door. They then diverted to Fort Lauderdale-Hollywood International Airport, where they landed safely. The aircraft’s main entry door fell mainly intact, with its airstair still attached, before hitting the 16th fairway of the Westin Diplomat Resort & Spa’s championship golf course near Hallandale Beach. The course was reportedly closed at the time of the incident. No one on the ground was injured by the falling door, which landed with such force that it bounced 15 feet after initial impact. A Bombardier spokeswoman told AIN that the Challenger 600-series main entry door weighs 285 pounds. JetOptions Private Jets charters Challenger 601’s and has never had a problem such as this or of any other kind with this jet. 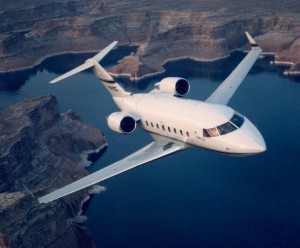