The Embraer Legacy 500 made a “flawless” one-hour 45-minute first flight today from the aircraft manufacturer’s headquarters at Brazil’s São José dos Campos Airport, marking the beginning of the midsize jet’s flight-test program. Embraer test pilots Mozart Louzada and Eduardo Camelier, along with flight-test engineers Gustavo Paixão and Alexandre Figueiredo, flew the fly-by-wire aircraft, performing handling and performance characteristics evaluation. As a result of the extensive use of simulation and ground testing, the aircraft was able to cover a “significant flight envelope” on the maiden flight, though the company hasn’t yet released speed or altitude data. Aircraft systems were assessed during the flight, including landing-gear retraction. “This is the aircraft that will move us from industry player to industry leader,” said Embraer Executive Jets president Ernest Edwards. “The Legacy 500 breaks through the traditional midsize jet envelope to offer something that has never been done before. It is hard to overstate the importance of fly-by-wire technology. Fly-by-wire does for business aviation what GPS has done for navigation. It will empower more precision, efficiency, safety and comfort every time the aircraft flies.” Certification and initial deliveries of the Legacy 500 are expected late next year. Its mid-light sibling, the Legacy 450, is slated to cross the certification finish line about a year after that. 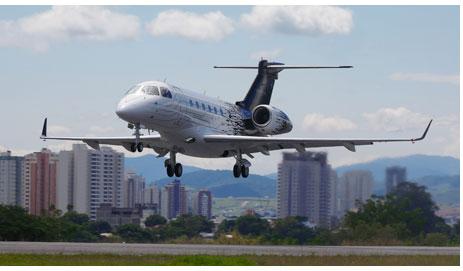