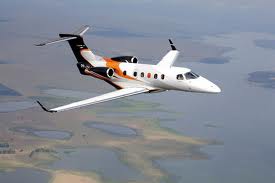 Melbourne, FL, April 1, 2013 – Embraer Executive Jets  handed over the first made-in-the-USA Phenom 300 to be delivered to a customer on March 29, 2013.
The aircraft was delivered to an undisclosed customer who will use it to connect his business network in the U.S..
“This is a major milestone for Embraer Executive Jets and proves the maturity of our assembly facilities,” said Phil Krull, Managing Director Melbourne Assembly, Embraer Executive Jets. “We have quickened the manufacturing pace and will be able to accommodate a more demanding schedule. This is a testament to the hard work and professionalism of our employees both here and in Brazil.”
The customer delivery comes after Embraer Executive Jets’ Flight Department took delivery of the first Phenom 300 off the Melbourne assembly line. That aircraft, which is now being used as a demonstrator, was recently used to set a series of transcontinental records for light jets between Melbourne, FL, El Paso, TX, and Long Beach, CA.
“Market acceptance of the Phenom 300 has been very high,” said Bob Knebel, Vice President Sales – North America. “We have found the Phenom 300 to be particularly well received by owner-operators, corporate flight departments and leading fractional providers. This acceptance led to the Phenom 300 being the most delivered aircraft in the light-jet category in 2012.”
Judged one of the top 15 most influential business aircraft of all time by industry press, the Phenom 300 is the roomiest in its class. The eight- to 11-seat aircraft has the best climb and field performance of any light jet. It is designed for 15% lower operating costs and offers the most range and speed in its class. The Phenom 300, as with all Embraer Executive Jet aircraft, set a new standard for light business jets and is the recipient of many international design and innovation awards.
For more information about Embraer Executive Jets, see: www.EmbraerExecutiveJets.com.