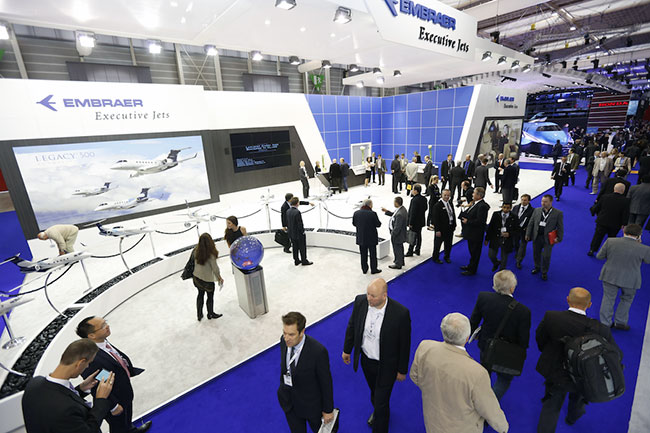 As the 2013 European Business Aviation Convention & Exhibition (EBACE2013) closed Thursday, organizers reported that the show’s success demonstrated its continuing importance.
As EBACE2013 concluded, organizers reported that 12,353 delegates attended the event, a figure on par with attendance figures for recent years. EBACE Attendees had an opportunity to visit 460 Exhibitors – a count comparable to that for 2012, and the third-highest number in the event’s 13-year history. The EBACE2013 Static Display of Aircraft, which showcased 52 aircraft, had more square footage than ever, and was sold out with a waiting list. As always, the show was also viewed by Exhibitors as a premier news-making venue: About 30 press conferences were held during the show’s three days, and more than 400 reporters, from news organizations around the world, were registered to attend and cover the news Exhibitors made at EBACE2013.  These figures led the show hosts – the European Business Aviation Association (EBAA), and the National Business Aviation Association (NBAA) – to characterize EBACE2013 as a real success.
EBAA CEO Fabio Gamba said, “What I saw at EBACE2013 was an industry that is not only addressing the economic situation in this region, but one that is taking the necessary steps to ensure that business aviation remains essential in Europe.”

NBAA President and CEO Ed Bolen agreed, stating, “Just like last year, EBACE has proven to be of great value to the business aviation community – it has been a place where the industry has rallied together, made new announcements and set a positive tone, all of which has the business aviation community looking forward to the future.” JetOptions is a member of NBAA and Vice President Gus Lira attended the event in Geneva.

EBAA President Brian Humphries said, “As we conclude EBACE, one thing remains clear: EBACE continues to be the single-most important European event on the industry’s calendar, and the best opportunity for buyers and sellers to connect in Europe.”

The 2013 show kicked off with the traditional Opening General Session that featured top aviation authorities discussing the state of the industry in Europe.

As in past years, education and safety were also important themes for EBACE2013. On May 20, before the show’s official start, a well-attended, one-day EBACE Safety Workshop provided critical safety information to operators, with a particular focus on human performance factors, while an EBACE Cabin Crew Symposium addressed safety, security, service and training issues relevant to business aviation cabin crew operations. An EBACE International Aircraft Transactions Seminar offered insights from leading experts about the financial, cultural, legal and transactional issues that impact buyers and sellers of business aircraf

Throughout the show, a host of Educational Sessions – always a part of EBACE – offered guidance on everything from government policies affecting the industry, through new technologies for business aircraft use, to specific business aviation trends unfolding within the European region.

On the show’s final day, a delegation of more than 30 CEOs from area companies joined EBAA and NBAA at EBACE for a briefing on how business aviation can help their companies compete and succeed, followed by a tour of the Exhibit floor and the Static Display of Aircraft. The show organizers coordinated the CEOs’ visit to EBACE with the French/Swiss Chamber of Commerce.

The business aviation industry’s future needs were also addressed at the EBACE2013 Student Day, a dedicated seminar providing students with current and reliable information about the business aviation industry, granting them a valuable perspective on the opportunities that the industry may offer them. A delegation of 40 university students from Spain, Belgium and Switzerland spent the day at EBACE2013, received a site tour and viewed the Exhibit floor and Static Display of Aircraft at their leisure.

EBACE2013 was held May 21 to 23, and the event’s 14th annual gathering will return to Geneva next year from May 20 to 22, 2014. For more information, photos from the show, Twitter feeds and a downloadable EBACE app, visit www.ebace.aero. 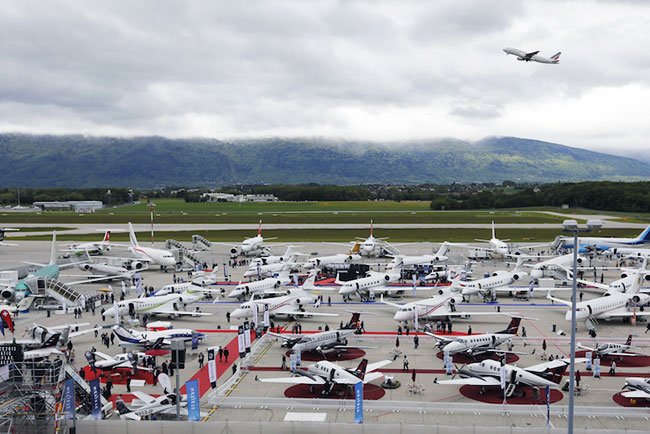