Airports in the U.S. East Coast escaped largely unscathed by high winds from Hurricane Irene this weekend, though flooding presented a problem at the metro New York City airfields, particularly Teterboro and Caldwell, N.J. Like TEB, Morristown and Newark Liberty International Airports were shut down at noon on Saturday, with the latter two restarting operations by Sunday evening. Teterboro, however, remained closed until yesterday afternoon because of flooding. Runway 1/19 at Teterboro was reopened yesterday, while Runway 6/24 was opened this morning. According to NBAA’s GA Desk, Caldwell is currently closed to fixed-wing traffic due to runway flooding; the airport was open yesterday. Signature Flight Support told AIN that its FBOs stretching from Washington, D.C., to Boston suffered only minor damage from the storm, and added, “all customer aircraft were safe and secure, with no damage sustained.” The FBO chain’s five facilities in Washington, D.C., and Boston remained open during the storm, a spokesman said. Signature was able to remain in constant contact with its affected bases throughout, and it kept customers informed about the operational status of its FBOs by using its website, as well as social media. Meridian Teterboro has before and after storm photos posted on its Facebook page. (Photo: Meridian Teterboro) 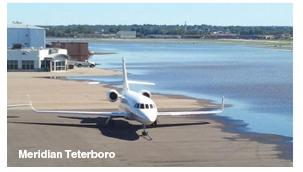