With JetOptions Private Jets Los Angeles charter, you can book a private jet in and out of LA, Southern California, or around the world. Our Beverly Hills office specializes in destinations throughout Southern California, the West Coast, and the globe. As a full-service aviation charter company, we can fly you to any airport worldwide. Depending on your ultimate destination, JetOptions will route you to the most advantageous location for your flight. We also handle every detail of your private jet charter to perfection.

We are experts in obtaining the perfect private jet experience,  from selecting your preferred aircraft to your travel times, catering, and ground transportation. Minimize travel risks by avoiding crowds and lines in commercial facilities. Enjoy a private, secure, confidential environment while you travel Los Angeles in a relaxed, comfortable setting. Request your no-obligation jet charter quote today.

The city of Los Angeles, famous for the film and television industry, and JetOptions, are the perfect pair. Enjoy the private jet advantage with the general aviation airports’ availability surrounding Los Angeles. There are 5 commercial airports in LA and 7 additional municipal airports for private planes and their passengers. LA is a bustling private plane route to and from New York, Las Vegas, and Hawaii.

Los Angeles is all about the industry, and such a big city requires covering a lot of ground to arrive at your ultimate destination. Traveling by private plane on your schedule is an all-embracing luxury that people request, and JetOptions can provide. LA is the second most populous metro area and covers a significant portion of real estate. This leading business center and its surrounding natural beauty make flying in and out a natural stop for work or pleasure trips. Get even more convenience by booking with us to arrive at your preferred private jet airport. 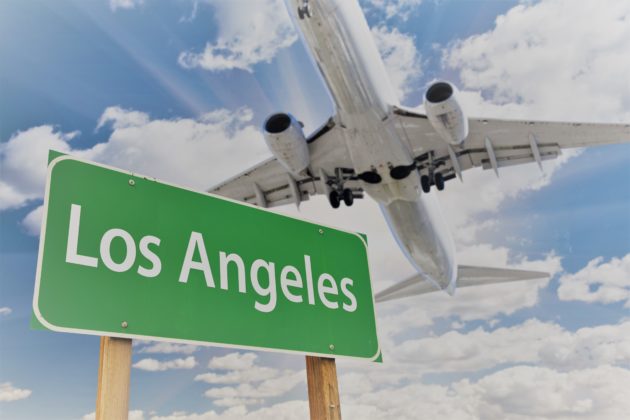 Choose Any of the Multiple Airports in Los Angeles County

The drawback of being the busiest airport in the area is that commercial and international flights occur in large numbers at peak hours, which may cause an air traffic delays in private jet flights. However, LAX does have a separate runway for private jets and two FBOs for private terminal and fueling services, making it a convenient stop for a private jet charter in Los Angeles. 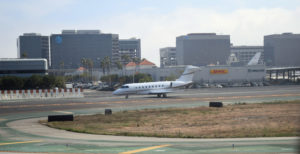 Van Nuys Airport (VNY) is one of the preferred private airports in the greater LA area. It’s a public airport in the San Fernando Valley north of Los Angeles. The significant fact about this airport is that no major airlines fly into this airport, making it readily available for private jet travel. It’s also one of the busiest for private jets, with more than 200,000+ takeoff and landings every year.

Van Nuys Airport is also very close to the significant areas of Studio City, Hollywood, and Malibu, and it is the preferred airport for private jet charters in Los Angeles. Many American politicians, VIPs, and Hollywood celebrities choose VNY due to its expediency and extreme anonymity. The Van Nuys Airport covers 725 acres and has two runways, one for jets and a smaller runway for single-engine and smaller planes.

Due to its easy schedule and no significant airline linkages, the pricing of aircraft landing and departure services at KVNY is also considered nominal, and the time slots are easy to adjust. Many major FBOs serve private aircraft charter at VNY.

Van Nuys Airport FAA Control Tower Hours are from 6:00 AM until 10:45 PM daily, and there are two  runways:

Santa Monica Airport (Santa Monica Municipal Airport) was the desired airport known for SoCal’s general aviation activities until recent runway reductions. The airport is 2 miles from the Pacific Ocean and is 6 miles north of LAX airport. SMO has one FBO to meet the needs of private jets with terminal and fueling services. With the imminent airport closure and the planned reduction in the runway, large planes will no longer be allowed at Santa Monica.

Santa Monica (SMO) was a favorite natural choice for people going to or coming from Beverly Hills or Malibu. This airport operates two runways. KSMO is a general-use airport , and residential areas surround the airpark. The City of Santa Monica forcefully enforces one of the most stringent noise ordinances in the nation. This airport has another drawback, limited curfew hours that restrict aviation activity for general and private planes. In 2029, the Santa Monica Airport is slated to cease all flight operations and convert to parkland.

Santa Monica has one runway in operation and one helicopter pad:

Hawthorne Municipal Airport, located in Hawthorne, is an FAA-designated reliever airport in Los Angeles County. Also known as Jack Northrop Field, it’s the home of Northrop Grumman Aviation and SpaceX. Owned by Hawthorne’s city, there is an FAA air traffic control tower on-site, 2 FBOs, and a runway of 4,956 feet in length. HHR control tower hours are from 6 AM until 8 PM daily.

Torrance Municipal Airport is located within and owned by the city of Torrance. There are two active runways and a helipad, with the longest runway at 5,001 feet in length. Air traffic control tower hours are from 7 AM until 8 PM daily. Four FBOs are on-site at KTOA for passenger, fueling, and hangar services.

With two FBOs on-site, the air traffic and aviation activities in or out of KBUR are usually light and comfortable, ideal stops for private planes in Los Angeles. However, private jet traffic often competes with other commercial flights, and the slots are frequently issued to airlines first. Burbank airport has two active runways. Due to the wind from the southern area, Runway 15 is usually used to avoid wind or other related weather incidents. 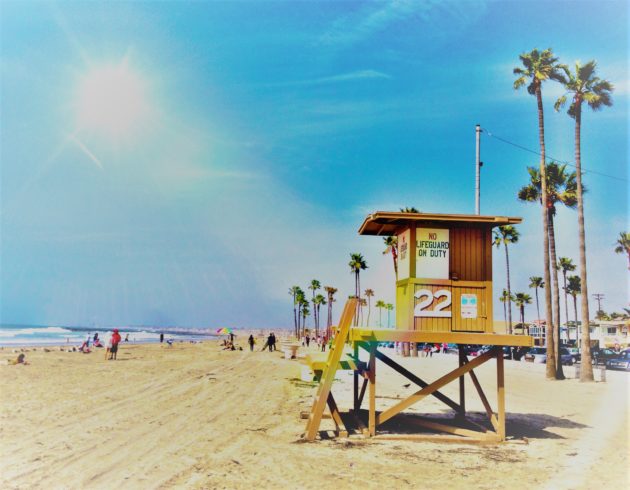 LA is the most extensive metro region in the U.S., covering nearly 34,000 total square miles. Notorious for freeway traffic, JetOptions Private Jets can fly you in and out of your closest airport saving you time in travel. For  Southern LA and Orange Counties, like Costa Mesa, Newport, Laguna, Dana Point, or the Anaheim resorts, a South County Airport is a closer choice for arrivals and departures.

Long Beach Airport has four Fixed Base Operators (FBOs) to fly private jet charters in Los Angeles. KLGB has global connections and 12 nonstop commercial destinations. Long Beach Airport also has spacious runways for large planes to take off and land. The aviation traffic is also light at KLGB, which typically causes no delays in private journeys when you fly privately in and around Los Angeles.

John Wayne Airport (KSNA), also known as the Orange County or Santa Ana Airport (SNA), is located in Orange County, California. It is the only commercial airport in all of Orange County. This airport is also one of the busiest next to LAX and Van Nuys for private airplanes and jet charters.

John Wayne Airport is busy and has many slots for private flights and charters, making it friendly to private jet travelers. SNA provides some of the best accommodations for a private jet charter in South Los Angeles. The main runway is just 5,701 feet long, making it one of the shortest commercial runways in all of America. ARGUS & Wyvern certifications require a runway minimum of 5,000 feet for a chartered private jet. KSNA fits the size and runway criteria for takeoff and landing. The airport has two FBO (Fixed Based Operators) terminals serving private jet clients and private jet charters in Los Angeles.

Fullerton Airport is the single general aviation airport in Orange County. Owned by the city, there is one runway of 3,121 feet in length and a helipad. There are two FBOs on-site at KFUL.

Brackett Field Airport is located in LaVerne and is owned and operated by Los Angeles County. This facility has two runways: the longest at 4,840 feet and the shorter at 3,661 feet. Air traffic control is on-site from 7 AM until 9 PM, and there is one fixed-base operator at POC.

Ontario International Airport is located approximately 38 miles east of downtown Los Angeles, in Ontario. Runway length at ONT is 12,197 feet, and 1 FBO is available for private jets for takeoff and landings at KONT.

Private jet charter rates to Los Angeles examples are based on roundtrip travel with a next day return. Prices (USD) can be used as a reference. Your rate will depend on your travel requirements and aircraft availability. Prices on private charter flight quotes will include all taxes and fees.

Wherever your ultimate destination may be in Los Angeles or Orange County, JetOptions has the expertise to make your charter travel experience memorable. Suppose you are flying for a quick trip to San Francisco, cross-country from Chicago or Miami, London, Mexico City, and cities worldwide. In that case, our friendly aviation experts can make every booking detail – perfectly.

Whether traveling on a business trip or a leisure getaway, chartering a private jet is the best way to travel. A charter flight eliminates the hassle of preparing your itinerary and worrying about airport traffic, baggage check-in, oversold flights, and long security lines. Our private jet destinations pages feature routes and regions popular with private jet clients everywhere.

Fly on a private jet charter to or from Los Angeles. Call JetOptions or Email our experts today. 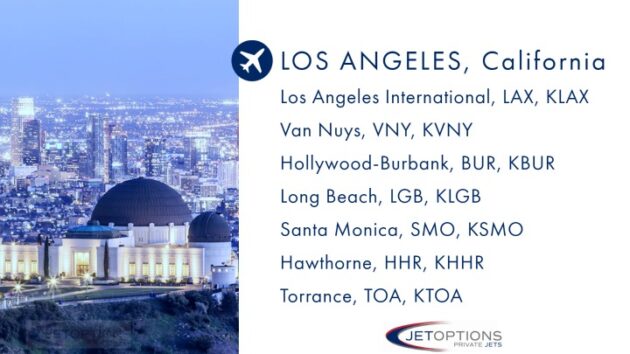 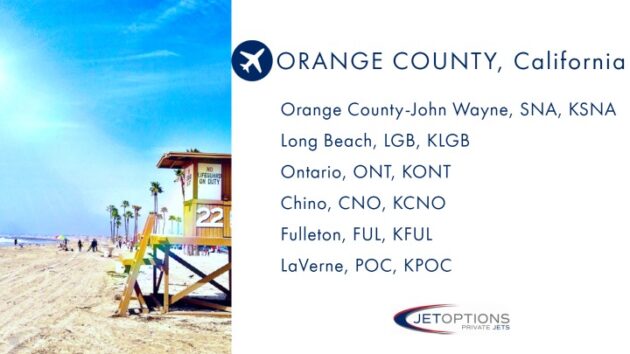