With exclusive charter flights, Dallas private jet charters are arranged on your schedule at JetOptions Private Jets. With our premier private jet charter services to and from Dallas, you can take advantage of the flexibility of flying private and departing from or arriving at any of the DFW metro area airports.

Whether you are flying for a business trip or a vacation to Dallas and Fort Worth, JetOptions has you covered. Consider the many advantages of chartering a private jet with us:

The City of Dallas is the owner and the operator of the Dallas Love Field Airport. DAL is widely considered one of the finest general-purpose airports in the world. Serving commercial airlines, general aviation, executive and business jets, and private planes, KDAL is located only six miles northwest of downtown Dallas’s central business district.

Love Field includes a 24-hour FAA air traffic control tower and all necessary aeronautical lighting on three total runways. The longest runway measures 8,800 feet in length, and the two shorter runways are 7,752 feet and 6,147 feet, respectively. All three runways are long enough for private aircraft takeoff and landings. With six fixed base operators (FBO) on-site at KDAL, general aviation is a significant portion of the air traffic each day.

Dallas-Fort Worth International Airport is the primary commercial and international airport in the metro region. DFW is the third busiest airport for aircraft moved and the eleventh busiest passengers, with 75 million in 2019. KDFW is the busiest airport in Texas and is more extensive than Manhattan Island with its zip code, city designation, and postal service.

DFW is located halfway between Dallas and Fort Worth and includes parts of Irving, Euless, Grapevine, and Coppell. Private plane flights into or out of KDFW may experience a delay for commercial traffic. However, significant wait times are offset with five active runways ranging from 8,500 feet to 13,401 feet. There is one fixed-base operator (FBO) on-site to meet the needs of private jet passengers. U.S. Customs, refueling and hangar services, car rentals, and if necessary, connections from or commercial flights.

Addison Airport is a public-use general aviation airport in the City of Addison. Located nine miles north of downtown Dallas, ADS opened in 1954, and the city purchased the facility in 1976. KADS is in Dallas County and is convenient to North Dallas, Richardson, Frisco, and the Plano Legacy Corridor.

ADS Airport has more than 90,000+ annual general aviation and private jet operations each year. There are two FBOs, an FAA control tower, 24-hour Customs service, plane refueling and hangar services, car and ground transportation. The single runway at KADS is 7,202 feet long and is only used by general aviation aircraft and private planes. General and charter flights are not likely to experience delays, as there are no commercial airlines in Addison Airport.

Fort Worth Meacham International Airport is a city-owned general aviation airport. FTW, located near downtown in the Northwest area of Fort Worth, is an available nearby choice for private planes. KFTW, like KDAL, was the first regional airport before the construction of Dallas-Fort Worth International.

FTW is a general aviation facility with no commercial operations at the airport. Therefore, private aircraft flying in for business or leisure in Fort Worth should not experience significant delays. There are three runways, one for Jets at 7,501 feet in length, and two helipads.

Dallas Executive Airport, the former Redbird Airport, is a city-owned FAA Reliever Airport for Dallas Love Field. RBD is a public airport and is used exclusively for general aviation and private jet flights. Therefore no commercial airlines fly to or from KRBD. Private jets arrive and depart from this airport, located 10 miles south of Downtown Dallas.

Arlington Municipal Airport is a publicly owned general use facility located in the city of Arlington, Texas. Located between Dallas and Fort Worth, GKY is located south of Dallas-Fort Worth and is an available aviation reliever facility for DFW and Dallas Love Field. KGKY is located 7 miles south of AT&T Stadium, the home of the Dallas Cowboys, and Globe Life Park, the home of the Dallas Rangers.

GKY currently operates for general aviation traffic only. Therefore, there are no scheduled commercial flights in and out of Arlington Municipal. One FBO on-site at KGKY offers passenger services, ground transportation, aircraft refueling, hangar, and maintenance services.

Private jet charter rates to Dallas examples are based on roundtrip travel returning next day. Prices (USD) can be used as a reference. Your rate will depend on your travel requirements and aircraft availability. Prices on private charter flight quotes will include all taxes and fees.

More Dallas and Fort Worth regional airports and private jet facilities with hangers and landing facilities for chartered flights:

Fort Worth Spinks Airport is 14 miles south of downtown Fort Worth, Texas. FWS is at the intersections of 35W and HWY 1187, just outside of DFW airspace.  A designated reliever airport FWS’s longest runway is 6,002 feet. One on-site FBO is providing full service for planes and passengers.

Thе vаrіеtу оf thіngѕ tо dо ѕtаrtѕ wіth grеаt ѕhорріng, Dallas is the hometown of Neiman Marcus. It’s also the home of one of the largest museums in America, the Dallas Museum of Art. Nearby, the Nasher Sculpture Center features the Nasher Collection on a rooftop and an outdoor setting. Klyde Warren Park is downtown Dallas’slatest addition to the arts district full of fine dining, music, theater and opera, outdoor events, and a trendy food truck scene.

Rеunіоn Tower
Rеunіоn Tower іѕ probably THE Dаllаѕ lаndmаrk, and no skyline photo is truly complete without it. It rіѕеѕ 50 ѕtоrіеѕ and оffеrѕ оnе of the best views of Dаllаѕ and the surrounding аrеа. Visitors are greeted by panoramic windows offering 360-degree views of the city from the revolving fine-dining restaurant. 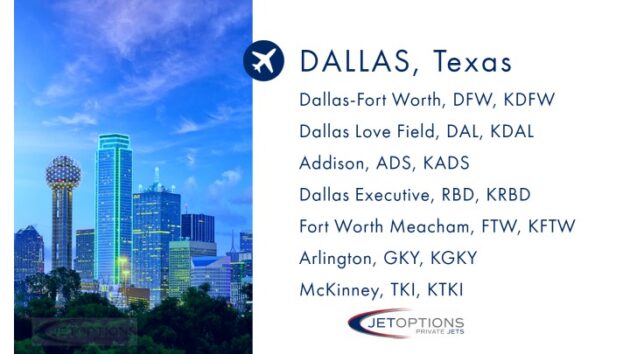