Chicago private jet charters, with private charter flights planned on your schedule at JetOptions Private Jets. With our exclusive private jet charter services to and from the Windy City, you can take advantage of the versatility of flying privately and depart from and arrive at any of the airports in the Chicagoland area.  These include Midway & O’Hare Airports, Chigaco Executive Airport, DuPage, Aurora, and Chicago Waukegan Airport, to name a few.

Avoid the crowds and cramped aisles associated with flying on commercial airlines. With JetOptions signature private jet charter services, you can add hours of business or pleasure to your travel day. Whether you are planning business meetings in “The Loop” or traveling for the museums, the arts, or even the lakes, JetOptions will perfectly arrange your flight itinerary. Skip security lines, connecting flight requirements, and the travel risks associated with a commercial trip.

One of the many advantages of traveling by private jet is the general aviation airports’ availability surrounding large metropolitan areas. There are two commercial airports in Chicago and four additional municipal airports for private planes and their passengers. Depending on your ultimate destination, JetOptions will route you to the most advantageous airport for your specifications. We also handle every detail of your private jet charter flight to perfection. We are experts in getting air charter done right from the choice of preferred aircraft to your travel times, catering, and ground transportation.

Chicago Executive Airport (KPWK) is a general aviation airport located 18 miles northwest of Chicago in Wheeling, IL. It was formerly known as the Palwaukie Municipal Airport, a name that still gets used today. Chicago Executive has three runways, with the longest at 5,000 ft. and two FBO’s.

Particularly relevant for jet charters is direct vehicle access. You can drive your car or limo onto the airfield for on-ramp jet access, a handy feature in Chicago winters. This airport also has U.S. Customs on-site for international flights. PWK is also the designated FAA relief airport for Midway, with a control tower and advanced runway equipment. Notably, KPWK is the home of many of the Fortune 100 Companies’ aircraft based in Chicagoland. PWK is the primary airport for business aircraft and executive jet charter flights into the Chicago metro region.

Midway Airport is the oldest Municipal Airport in all of Chicago. Initially built in 1923, it covers one square mile in the center of the Western Chicago suburbs. Midway is the closest geographical airport to downtown and has convenient access to the city center at just 8 miles away. MDW airport has five runways , with the longest at 6,522 ft., and two FBO’s serving private aircraft. Therefore, the trade-off of selecting this airport for private jet charter travel is the shared runways with commercial flights.

Keep in mind that the possibilities for an arrival or departure delay at KMDW are higher, as commercial flights have priority. Additionally, Takeoff and Landing fees have a higher price at this airport than when you fly into an Executive Airport.

O’Hare International Airport (KORD) is the most famous, some might say the infamous, airport , and it is the busiest one in the region. It is located on the Northwest side of town, 17 miles from downtown’s Loop.  ORD is a giant facility covering 7,000 acres and is the second busiest airport in the world.  O’Hare has eight runways, including the longest one in Illinois at 13,000 ft. There is only one FBO at KORD serving private planes and charter flights. Like Midway Airport, takeoff and landing fees are higher, along with possible air traffic delays created by commercial jets. However, if you prefer your private jet flying to or from Chicago’s O’Hare or Midway, we will manage all those reservations.

DuPage Airport (KDPA) is 29 miles away from downtown Chicago and is about an hour’s drive by car. It has four runways, including the second-longest one in the region at 7,571 feet. Therefore, you can land a full-size airliner like Boeing’s Business Jet at DuPage, and only O’Hare has a longer runway. DPA is located on the west side of town, like PWK, and has a top-ranked FBO. Nearby, Prairie Landing Golf Course offers championship golfing, and DuPage is only minutes from Western Chicago’s commercial center.

Aurora Municipal Airport (KARR) is situated 50 miles west of Chicago, located in Kane County. Similar to DuPage Airport,  their longest runway can also host an airliner-class at 6,500 ft. in total length. AUZ has three runways, and two of them meet the standards for ARG/US Wyvern charter jets. Like Midway, there are two FBO’s that provide charter services. Located in Aurora, Chicago’s downtown is about 40 minutes away, and Oakbrook is 30 minutes away by car. AUZ is considered the gateway for NASCAR events due to the proximity of Chicagoland Speedway and the nearby Route 66 Raceway.

Waukegan National Airport (KUGN) is a full-service public airport and is another designated reliever airport, like Midway. Located 35 miles north of downtown Chicago, UGN offers easy access to the interstate system and is renowned for its superior private jet service. Whether you are flying to Northeastern Illinois or Southern Wisconsin, it’s an excellent choice for your business jet charter. With two runways, the longest at 6,000 ft., KUGN, like DuPage, has one FBO for private jet charter service.

Waukegan is also home to many of the Chicago Fortune 500 company aircraft. Due to its onsite-customs, it is also used by business, corporate, and government travelers, including diplomats. KUGN also prides itself on its snow removal equipment and ILS (Instrument Landing System). As a result, they remain open during snowy or adverse weather conditions, and in some instances, they have the only clear runway in the entire region.

Private jet charter rates to Chicago are estimates based on roundtrip travel with a next day return. Prices (USD) can be used as a reference. Your rate will depend on your travel requirements and aircraft availability. Prices on private charter flight quotes will include all taxes and fees.

Wherever your travels take you – we offer private jet charters for Chicago, Northeastern Illinois, Southern Wisconsin, and points worldwide. Fly with the private air charter experts at JetOptions. Book your plane today;  Call, or Email Us for more information on Chicago flights. 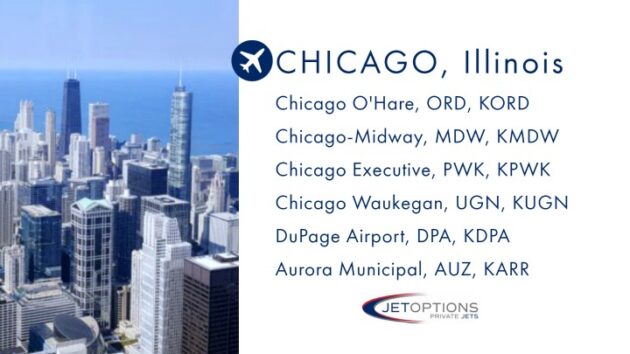