Fly by private jet charter in and out of Boston with JetOptions. Rich with modern history, the City of Boston is among the first American cities. Discover this busy New England hub with the peace of mind that traveling by private plane can deliver.

When you fly private, go beyond the busy terminals at Boston Logan International Airport. Avoid the crowds and crowded spaces at commercial facilities. Get a security upgrade over today’s travel realities and let JetOptions manage all your flight details. Expand your reach in Boston and New England, with a selection of airports to fly in and out of, depending on your needs. Whether traveling for business or some much-needed downtime, enjoy the flexibility that only private jet charters can offer you.

Logan’s official name is General Edward Lawrence Logan International Airport or Logan. Located in East Boston and neighboring Winthrop, BOS covers 2,384 total acres and has six active runways. These runways range from the shortest at 2,557 ft. to the two longest at 10,000+ ft.

Boston Logan is an international hub, and overseas commercial travel at Logan has tripled during the last 30 years. Due to the Airlines’ heavy commercial traffic, private jets and charters may experience delays in both takeoff and landings. Also, landing fees may be higher when choosing this airport for chartered plane travel. There is one FBO on-site at BOS for fueling and terminal services.

Laurence G. Hanscom Field is a public airport operated by Massport in Bedford, Massachusetts. BED is predominantly a general aviation airport and is the largest in New England. There are two runways here that accommodate jets. The longest runway is 7,011 ft, and the shorter runway is 5,107 ft long. Business charter and general aviation planes have three FBOs on-site to meet all aircraft needs.

KBED has handled the second most aircraft traffic of any airport in New England, after Boston Logan. Hanscom’s air traffic is primarily business jets and other private jet class aircraft. KBED is the select airport for private jet travelers going to and departing from Boston.

Lawrence Municipal Airport is in North Andover, Massachusetts. Thirty miles from Boston and forty miles from Portland, Maine, LWM is centrally located for greater New England travel. Home to 200 corporate and private executive aircraft, the airport features two runways.  The longest runway measures 5,001 feet and is suitable for landing jets. LWM has an Instrument Landing System (ILS) and operating hours of 7 AM to 10 PM. There are four FBO’s on-site, 24-hour fueling, and aircraft deicing among available services at KLWM.

Beverly Regional Airport is a city-owned public facility outside of Beverly, MA. It’s a convenient choice for corporate and business aircraft flights, located three miles northwest of the business district. A designated reliever airport for Boston Logan, like T.F. Green Airport, the longest runway is 5,001 feet.  KBVY has two active runways, and the longer one can manage jet class planes. One FBO on-site at BVY for fueling, hangar, and private jet passenger services.

Theodore Francis Green Memorial State Airport, PVD, is a public international airport in Warwick, Rhode Island. The airport is six miles south of Providence, the largest city in the state. Named for the former Rhode Island Governor Theodore F. Green, it originally opened in 1931. T.F. Green is the first airport owned by a state in all United States. PVD is the home airport of the NFL’s New England Patriots.

T.F. Green Airport, KPVD, is another regional airport and is a designated relief airport for Boston Logan. Both can handle jet traffic with two long runways at 7,166 ft and a second runway at 6,081 ft. There is one FBO on-site at KPVD serving private aircraft customers.

Private jet charter rates to Boston examples are based on roundtrip travel returning the next day. Prices (USD) can be used as a reference. Your booking rate will depend on your travel requirements and aircraft availability. Private charter flight quotes will include all taxes and fees.

Boston private jet charter flights offer the best convenience and security when it comes to travel. There is no traffic, crowded airports, or long lines at the checkpoint. In addition, Boston is one of the country’s financial and academic centers, making it a popular location for international meetings and summits. Flying privately is an excellent way to quickly and easily reach your destination in the city. And when you’re ready to get to work, a private jet rental can provide you with the security and flexibility you need.

Charter your private jet to the City of Boston or Greater New England with JetOptions today. Call us, Email Us, or dial toll-free for your custom private jet charter quote. 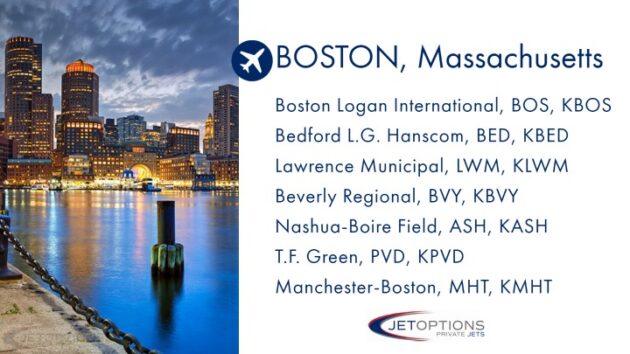