You’ll find an exciting hub of the South when you fly a private jet charter into and out of Atlanta with JetOptions. With a city that was initially planned as a railway junction, modern Atlanta is an important economic and cultural center.  In the downtown core, the newly completed Mercedes-Benz Stadium has replaced the Georgia Dome.  Projects like this billion-dollar sports and entertainment complex and many others are the new economic revitalization designs bringing in leading events.

Travel by private jet charter and fly in and out of your choice of airports. When you fly private, your reach goes beyond the central terminals of  Hartsfield-Jackson Atlanta International Airport (KATL). If  ATL is your preferred airport, there are facilities for private jets , including a separate FBO terminal and U.S. Customs services for private plane passengers.

Need to fly an executive jet or corporate jet charter into or from one of the many company headquarters in the Atlanta metro region? The DeKalb Peachtree Airport  (KPDK) is the primary airport for business jet travel in and out of greater Atlanta and DeKalb County. KPDK has four runways for general and private air traffic, and five fixed base operators (FBOs) to meet the needs of private aircraft.

PDK has full services, including everything from 24-hour refueling and maintenance, hangar services, U.S. Customs and Border Patrol, private passenger terminal services, and a complete complement of ground transportation services.

Fulton County-Brown Field Airport (KFTY) is located northwest of Atlanta’s city center and is along the ring of Interstate 285. There are three runways at KFTY, and there are two fixed-base operators on-site for general aviation needs.

Cobb County International McCollum Field Airport (KRYY) is northwest of Fulton County airport with one runway and one FBO.

Atlanta Regional – Falcon Field (KFFC) is in Peachtree City, South of the Metroplex. This exclusively business aviation airfield has a 5,768′ runway and one FBO with 24-hour fueling services.

Touch down in a private aircraft charter to Atlanta, and you’ll find a humid subtropical climate with hot summers and mild winters. The city has more than 5.7 million residents and is considered the heart of the South.

Are you a film and TV fan? These days, when you fly by private plane to Atlanta, you’ll find that the city is the primary satellite market for the film and TV industry outside of Los Angeles and New York.

If you like tours, take an electric car trip around the city and see exciting attractions. With these small, personalized groups, you’ll explore Midtown where you’ll find some of the most popular restaurants, bars, clubs, and hotels, Downtown has the 23 karat gold dome of the Georgia State Capitol, Old Fourth Ward, and Inman Park. Even more, you’ll see the Doctor Martin Luther King Jr. National Historic Site, Georgia Tech, World of Coca-Cola Museum, and Centennial Olympic Park. While riding with five total passengers, enjoy a packed 90-minutes that spans just 15 miles.

The Center of the South is Available With a Private Plane

Take an exhilarating Segway tour of the city when you take a private jet flight in Atlanta. With only eight people, you’ll have an experienced guide take you around Midtown, learning about its history, architecture, landmarks, and recent renaissance. There are excellent restaurant districts and concert venues like the Fox Theater. If you like outdoor areas, visit Piedmont Park, Atlanta Botanical Garden, The Margaret Mitchell House, Georgia Tech, and the Federal Reserve Bank of Atlanta. If you’re a fan of architecture, you’re in for a treat when you view the homes of Ansley Park that include Tudor, Craftsman, and Italian Renaissance-style homes. The city is well-known for its extensive walking and biking paths, and outdoor event spaces.

Fly a private jet charter to Atlanta with JetOptions Private Jets, Call Us for a custom quote, or email our Charter Team today! 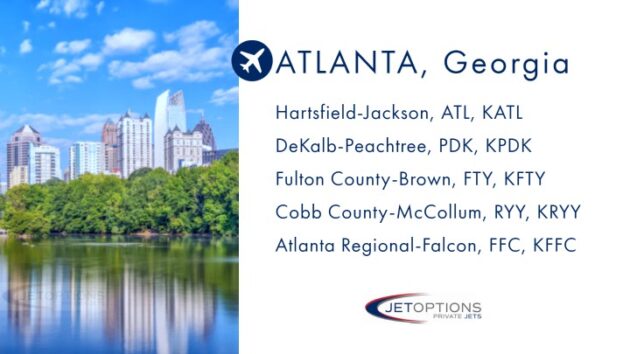