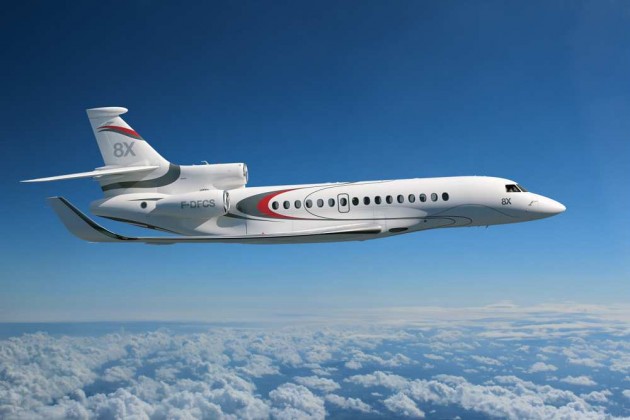 The 8X is an updated version of the Falcon 7X with improved avionics, engines, wings and the longest cabin of any of Dassault’s business jets.  Dassault will look to capitalize on increased demand for longer range business jets in Asia and other emerging markets.
Eric Trappier, chairman and CEO of Dassault Aviation, said the 8X will be the company’s “new flagship” and will feature “the most capability of any Falcon ever.”
An improved version of the Pratt and Whitney Canada P2307 engine will power the Falcon 8X. Along with the redesigned wings, Dassault said the Falcon 8X will be 35 percent “more fuel efficient than any other aircraft in the ultra-long range segment.”
Other improvements will be implemented into the cockpit avionics of the 8X, which Dassault says will feature a “totally redesigned cockpit modeled after the Falcon 5X.”  A new generation of the Dassault Easy integrated flight deck will be included on the 8X.  According to Dassault, the 8X cockpit will feature a Head Up Display (HUD) combining synthetic and enhanced vision.
Dassault’s announcement of the 8X comes following the French airframe manufacturer’s announcement of the 5X at the National Business Aviation Association‘s (NBAA) annual convention in October 2013.
“With two new aircraft in development, the 5X and 8X, Dassault will now be able to offer a family of six jets designed to meet the widest possible range of operator needs at the upper end of the business jet spectrum,” said Trappier.
Gulfstream G650ER
Gulfstream has announced the G650ER, adding 500 nautical miles of range to its existing G650 jet, which first entered service in 2012.
The General Dynamics Corp. subsidiary said the G650ER will be capable of traveling 7,500 nautical miles.  Improved range on the new aircraft is partially due to upgrades added to the G650’s Rolls-Royce jet engines.
Continue reading on AviationToday.com ->