Dassault Falcon 8X Raises the Bar for Range and Cabin

Dassault continues to expand the Falcon series, launching the new ultra-long-range 8X at the EBACE show on May 19 just seven months after unveiling the 5X at last October’s NBAA Convention. The 8X is a derivative of the Falcon 7X (which you can charter from JetOptions) trijet, introducing a longer fuselage and 6,450 nm range, a gain of about 500 nm on the 7X. 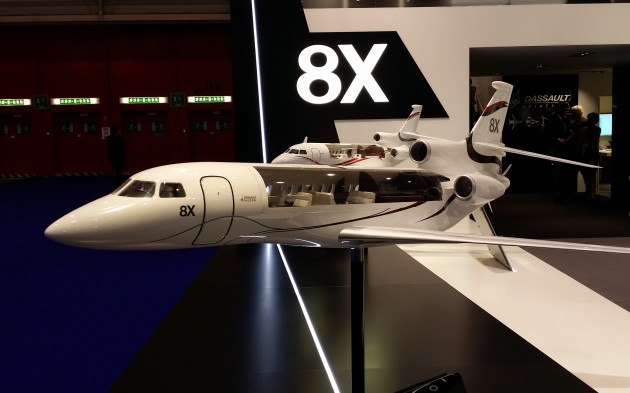 Expected to cost around $58 million (10 percent more than the 7X), the 8X is slated to fly in the first quarter of next year, followed by certification in mid-2016 and deliveries in the second half of that year. The first production 8X will go to Serge Dassault, chairman and CEO of Groupe Dassault.

A trio of Pratt & Whitney Canada PW307D turbofans, an improved version of the 7X engines, will power the 8X. Combined with a new wing design, the new powerplants will make the 8X up to 35 percent more fuel efficient than any other aircraft in the ultra-long-range segment, according to Dassault.

This month the French airframer’s Bordeaux Mérignac factory expects to take delivery of the first complete 8X fuselage from its Biarritz plant and the first wing from the Bordeaux Martignas facility. Ground testing of the first complete aircraft will begin later this year. At 42.6 feet in length (3.6 feet more than the 7X’s) and 1,765 cu ft in volume, the 8X’s cabin is the longest of any Falcon. Olivier Villa, senior vice president for civil aircraft, explained that the extra length will have a noticeable effect, allowing the installation of a large aft lavatory with shower and a compliant crew rest area in the front section, sandwiching a comfortable three-lounge cabin in the middle. The stretch is a response to feedback from current Falcon 7X customers, Villa said. Three floor layouts are available, depending mainly on the length the customer specifies for the galley/crew rest area.