Dassault Aviation’s Falcon 7X has set a new transatlantic speed record, flying between Teterboro in the New York metropolitan area and London City Airport at an average speed of Mach 0.88.

The Falcon 7X, serial number 207, took off from Teterboro Airport at 8:04 AM local time on May 2 with test pilot Philippe Deleume and Dassault operational pilot Olivier Froment at the controls. Three passengers were on board. The aircraft was fully equipped for normal operation with HUD, EVS and FalconCabin HD+ cabin management system. Five hours and 54 minutes later, at 6:58 PM local time, it touched down on the short 4,000 ft runway at London City Airport. You can charter the Falcon 7X from JetOptions.

For most of the 3,465 nm (6,452 km) trip, the 7X cruised at Mach 0.88. Both passengers and pilots reported a comfortable flight – testimony to the precision and smoothness of the 7X’s aerodynamic design and digital flight controls. 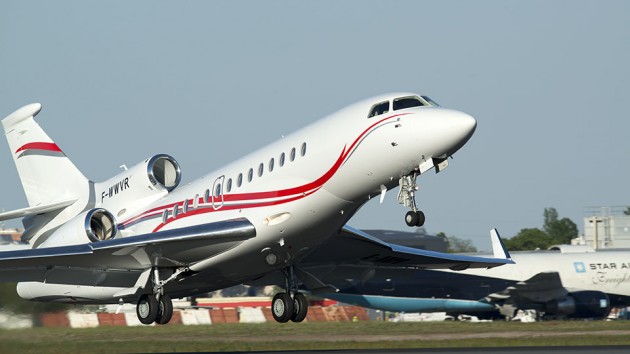 Falcon 7X flew at an average speed of Mach 0.88 on the record trip

The record has been sent to the Fédération Aéronautique Internationale in Switzerland for recognition as an official world record.

“This marks a new achievement for the Falcon 7X, which has consistently set the pace since it was introduced in 2007,” said Chairman/CEO Eric Trappier. “No other large cabin business jet can match the combination of range, comfort, fuel efficiency and operating flexibility afforded by the 7X,” remarked Trappier. “No wonder it’s the fastest selling Falcon ever, with 250 produced to date.”