The Dassault Falcon 7X fleet has accumulated more than 100,000 flight hours, marking a significant milestone for the French aircraft manufacturer’s 5,950-nm, large-cabin business jet. It delivered the first 7X in June 2007, and since that time 133 of the trijets have entered service in 31 countries. According to Dassault, the 7X fleet leader has accumulated more than 3,500 flight hours. The Falcon 7X was the first traditional business jet to incorporate a fly-by-wire control system, the company said, which “provides a greater safety envelope and a smoother flight.” It also comes standard with the EASy flight deck, which uses the Honeywell Primus Epic avionics system as a platform and is “designed to reduce pilot workload and improve pilot interaction through elevated situational awareness in the cockpit.” Another first for the Falcon 7X is that it was the first large-cabin jet to receive simultaneous EASA and FAA certifications, which occurred on April 27, 2007. Further, the 7X is also the only jet in its class to be qualified to operate into London City Airport, which requires special aircraft and crew certification because of its steep five-degree approach. 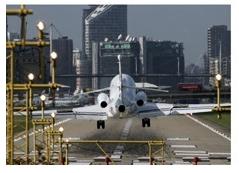