Corporate aviation on the rebound, but still a fragile industry

Many in the general aviation industry remember the day of November 18th, 2008. This was the day the CEOs of America’s “Big Three” automakers flew on corporate aircraft to attend a hearing in Washington DC regarding a federal government bailout to sustain them in the floundering economy.
But what about the general aviation industry? In the two years following 2008 corporate aircraft deliveries plummeted by 42% and forced manufacturers Cessna and Hawker Beechcraft alone to layoff over 20,000 workers. These were just some of the direct manufacturing jobs, the purge in general aviation has also affected maintainers, aircrew, administration, and other specialized aviation jobs. While the private jet may have been an easy political target, the effect of reckless hyperbole had a very real impact on the lives of tens of thousands of working class Americans.

Continue reading the story by Joshua Dalzelle on Examiner.com 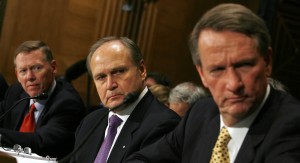