While Chinese airspace is becoming more flexible for general aviation operators, the pace of improvements is still slow. At the August 23 opening of the China Low-Altitude Economy Summit in Shenyang, a Chinese air traffic control official told the China Daily newspaper, “A series of reforms to the airspace will be coming over the next five to 10 years to help stimulate the fledgling general aviation industry.” Unfortunately, the official was speaking only about altitudes below 1,000 meters (3,280 feet). “Although the airspace transitions are moving more slowly than Westerners might like, it’s still a great start,” Doug Carr, NBAA vice president for safety, security and operations, told AIN. Evidently, there is concern among Chinese officials about reforming airspace rules too quickly in ways they might regret. “The Chinese civil aviation authorities have complex, highly regulated airspace, and discussions must include convincing the military to give up some control,” added Carr. “We want to help them deliver the best mobility [solutions] while helping them remain focused on aviation system safety.” 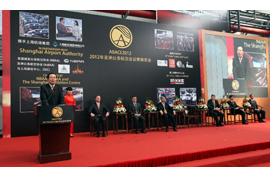