China wants help developing a safe business aviation operating environment, Civil Aviation Administration of China (CAAC) deputy administrator Xia Xinghua said today at the Abace opening session. “The CAAC sees the development of business aviation as a long-term strategic program. We can learn from our U.S. colleagues and mold the industry together.” U.S. DOT deputy secretary John Porcari said the Asian business aviation market will surpass that of Europe by 2030, and endorsed Xia’s comments. According to Xia, at the end of last year there were nine business aviation operators in China, with a further 48 applying for air operator’s certificates. He added that in 2010 there were 20 business aircraft in China. That number grew to 109 last year, and the CAAC has already approved import applications for 60 more jets this year. “By the end of the current 12-year plan we expect there will be 30 management companies in China and more than 280 new airports, 40 of which would be dedicated business aviation airfields,” he said. NBAA president and CEO Ed Bolen praised the cooperative spirit at Abace: “The support shown by these senior government leaders from the U.S. and China will serve as a catalyst for the industry.” 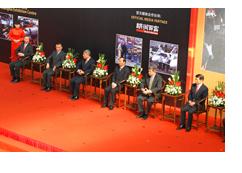