Cessna firmed up its plans to build business jets in China by sealing a joint venture with China Aviation Industry General Aircraft Company Ltd. (Caiga) to assemble and sell Citation XLS+ twinjets for the Chinese market. The deal, announced yesterday at Airshow China 2012 in Zhuhai, builds on the strategic agreement that Cessna signed with Caiga’s parent company, Aviation Industry Corp. of China (Avic), in March to produce Citation Sovereigns and Latitudes in China for this market. And in May, Cessna signed a deal with Caiga and the Shijiazhuang Municipal Government that lays the groundwork for final assembly of Caravans in China for the Chinese market. Under the terms of the new joint venture, which is subject to governmental approval, Cessna’s Wichita factory will provide XLS+ components, parts and subassemblies for aircraft that will then be assembled at a factory in Zhuhai, in the southern province of Guangdong. The Caiga plant will also handle painting, testing, cabin interior installation and delivery of XLS+s to Chinese customers. Apart from reduced final assembly costs, the joint venture also provides a way to avoid cumbersome Chinese import rules and taxes for foreign-built aircraft. In March, Cessna indicated that Citation Latitudes and Sovereigns could eventually be produced in another factory in Chengdu, but these plans were not mentioned during yesterday’s announcement. JetOptions charters the full line of Cessna aircraft. 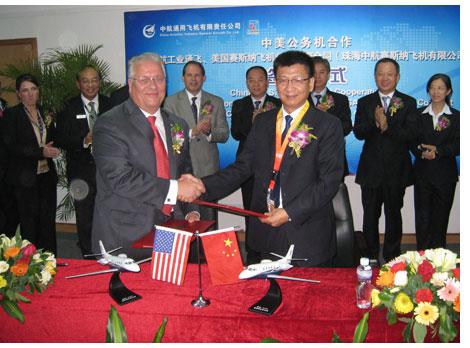