Six months after launching its midsize Citation Latitude, Cessna Aircraft today at EBACE announced a $25.9 million stretched version–the Longitude–that will fly 4,000 nm at Mach 0.82. First flight is scheduled for 2016, with entry into service in 2017. “The aircraft is long on range, high on value and low on price,” Cessna president and CEO Scott Ernest said at the unveiling. The super-midsize Longitude uses the same fuselage cross-section, windows, passenger seats and aluminum construction as the smaller Latitude, but will be nine feet longer. This gives it a 31-foot flat-floor cabin with passenger seating for eight. Mtow is projected to be approximately 55,000 pounds. The Longitude will be powered by a pair of Fadec-controlled, 11,000-pound-thrust Snecma Silvercrest turbofans with autothrottles, making it the launch platform for the engine. Cessna has selected the Garmin G5000 flight deck, using the same three-screen touch control avionics architecture that the company is using on both the Latitude and Citation Ten. The jet’s cabin management system will be built on the new wireless Clairity system that Cessna is developing for the Latitude, Ten and M2. Cessna plans to build the Longitude in Wichita. Notably, “This is not the large-cabin jet that we’ve talked about building in China with our partner AVIC,” Ernest told AIN. “That aircraft will be something different,” though he would not elaborate further. 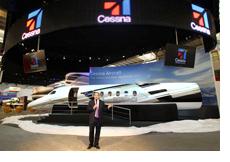