“When selecting an aircraft that would best fit the needs of my businesses, the Citation X+ was a clear winner,” Buchheit said. “We have clients located across the country and having the fastest civil aircraft in my fleet provides me with something that is priceless to my operations – time.”

Named the Citation X+ to reflect the aircraft’s evolution from the Citation X – an aircraft already established as an industry leader – the new Citation X+ has seating for up to 12 passengers, a maximum altitude of 51,000 feet, an unmatched maximum speed of Mach 0.935 (617 mph, 536 ktas) and an increased max range of 3,408 nautical miles. 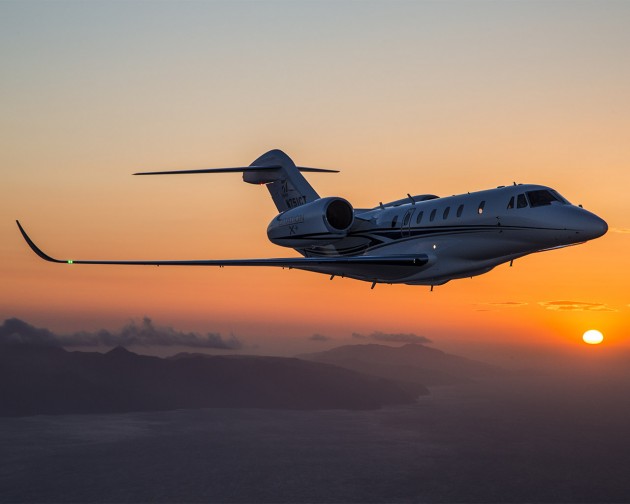 “Cessna is once more setting the benchmark for fast, fuel-efficient, high-performing business jets with the entry into service of the Citation X+,” said Scott Ernest, president and CEO, Textron Aviation. “Much of the input for the design and performance upgrades came from owners of the more than 300 Citation X jets in service. The Citation X+ offers increased payload and greater cruise speeds. It is also 15 inches longer than its predecessor, providing extra passenger legroom in the forward club seating area. That’s an essential feature because the Citation X+’s longer range not only make it possible to travel from New York to Los Angeles in just four hours, but also non-stop legs from New York to Paris, Dubai to Singapore or Panama City to São Paulo.”

The most distinct outward difference with the evolved Citation X+ is the addition of winglets, allowing the aircraft to cruise efficiently at higher altitudes and to consume less fuel, as well as improving takeoff and landing performance at higher elevations or on hot days. Powered by two FADEC-controlled Rolls-Royce AE3007C2 turbofan engines, the Citation X+ can fly above commercial traffic and some adverse weather at a maximum altitude of 51,000 feet.

Today’s news reflects the company’s focus on continued investment in general aviation’s most extensive product lineup. New Citation products coming to market within the coming year include the Citation CJ3+ and Citation Latitude.

More than 6,600 Citations have been delivered to customers around the world since the first Cessna Citation business jet was put into service in 1972. Citations are the largest fleet of business jets in the world and have surpassed 30 million flight hours.