Following closely behind its recent FAA certification, the Cessna Citation X+, the world’s fastest business jet, completed its first trans-Atlantic crossing in a normal business flight profile in 5 hours, 33 minutes for an average ground speed of 502 knots. Cessna is a subsidiary of Textron Aviation, a Textron Inc. (NYSE: TXT) company. 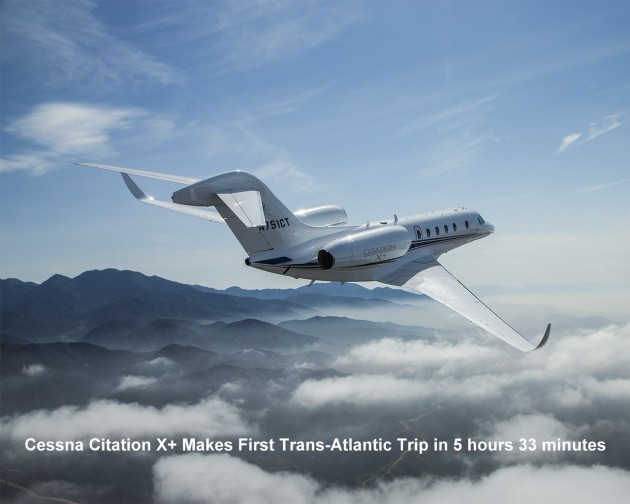 “We filed a fairly standard flight plan to demonstrate the capability a customer can expect in normal operations, and it was very impressive,” said Kriya Shortt, senior vice president, Sales and Marketing for Textron Aviation. “While the operator will realize a huge benefit from the Citation X+ during shorter cross-country flights, long flights like this is where it really shines.”

The Citation X+ flew from the Cessna factory in Wichita, KS to Presque Isle, Maine, then 2,788 nautical miles non-stop to Cessna’s facility at Paris Le Bourget for an event. The Citation X+ then completed its journey at TAG Farnborough Airport. For the trans-Atlantic leg, the aircraft made a direct climb to 45,000 feet, accelerating to an initial cruise speed of .86 Mach, then to .88 Mach for much of the flight to Paris.

The pace at which business aviation in China is growing is starting to be questioned; as the government’s tight control of its airspace shows little sign of loosening.

Although the country has been slowly experimenting with opening its airspace up, with small scale trials starting in Changchun and Guangzhou at the end of 2010, progress has been frustratingly slow, and is seen as one of the main barriers to the explosive growth rates predicted for the country.

Finally, a plane you can afford

To wander the Farnborough airfield during trade show week is to be dwarfed by the big beasts of global aviation, from the epic Dreamliners to the needle-sharp fighter jets, and all for sale.

But with even the cheapest models costing many millions of dollars, is there any prospect that owning an aircraft could follow computers and cars in becoming affordable to the masses?

The figures indicate otherwise. Private jet sales slowed to a crawl following the global recession, falling 3.4% to 682 in 2012 in the U.S. and rising just 0.9% the following year.

Even this minor growth has been concentrated at the top end of the market, with sales contracting toward the lower end. Bombardier airline President Eric Martel was candid about the prospect of an upturn, saying Monday: “It’s no secret the light segment has been difficult over the last couple of years.”

An enthusiast could still fulfill their dream through a fixed kit plane, or a discontinued antique. But looking ahead, their best bet might be the emerging field of the car-plane hybrid.

This week at the Farnborough International Airshow, Parajet is showcasing the SkyRunner to potential aviation distributors with a price tag of $80,000.

“With the combination of the Beechcraft and Cessna products within Textron Aviation, we now offer the largest proposition of special mission platforms in the industry,” said Dan Keady, vice president, Special Missions. “We have seen a significant growth in special mission activity around the globe and anticipate this market will continue to grow across our aircraft platforms. From our piston-engine Beechcraft and Cessna products up to the largest Citation business jets, we are able to offer our customers an aircraft to fit just about any mission requirement.”

The Beechcraft products, particularly the King Air turboprops, are utilized around the globe in a number of services including air ambulance, Intelligence, Surveillance and Reconnaissance (ISR), maritime patrol and pilot training, while the Cessna product line lends itself to multiple special mission roles from piston trainers, to the multi-purposed Caravan operating in an air ambulance, cargo, parachute and float plane platforms. The Citation jets are also used in training, flight inspection and air ambulance roles throughout the world.