Cessna’s swift midsize Citation Ten made its maiden flight from Wichita Mid-Continent Airport on Tuesday afternoon. Commanded by Cessna engineering test pilot Michael Voigt, the more than two-hour sortie evaluated stability and control, handling qualities, the autopilot and autothrottle system, engine operability and the Garmin G5000 avionics. Cessna expects FAA type certification in the middle of next year, followed by first deliveries in the second half. After its first flight, the Ten returned to Mid-Continent Airport, where Cessna’s main manufacturing facility is located. First flight had been slated for late last year, but a Cessna spokeswoman told AIN that “due to weather challenges (no program delay) we were not able to get it done before our Christmas shutdown. We then had a spate of windy conditions and low overcast in early January.” The Ten is 15 inches longer than the Citation X from which it is derived, providing extra legroom in the forward club seating area. All aboard will appreciate the max cruise speed of 527 knots and greater max range of 3,242 nm, which puts within reach nonstop city pairings such as New York-London, Boston-San Francisco, London-Dubai and Miami-Seattle. Compared with its predecessor, the Ten also has quicker time-to-climb numbers. 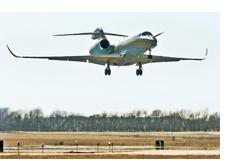