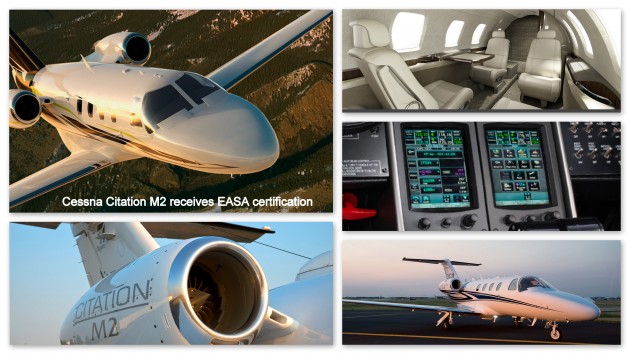 “We have had significant interest from European customers for the Citation M2, due to its size, speed and range,” said Chris Hearne, vice president, Jets. “This aircraft can easily handle non-stop legs throughout the region such as Paris to Athens or Zürich to Moscow. This news, coupled with the recent EASA certification of the Citation Sovereign+, means that customers in Europe have more options to meet their business aviation needs within the Citation family.”

The Citation M2 has a maximum cruise speed of 404 knots true airspeed (460 miles per hour) and a range of 1,580 nautical miles. It can operate at airports with runways as short as 3,210 feet and will climb to 41,000 feet in 24 minutes. The Citation M2 is certified for single-pilot operation with room for seven passengers and features two Williams FJ44 engines.

The Citation M2 design was driven by customer and pilot feedback. First flight of the Citation M2 prototype occurred in March 2012 and the first production unit flew in August 2013. The aircraft received Federal Aviation Administration (FAA) certification in December 2013 and 23 have been delivered through the first quarter of 2014.

This announcement reflects the company’s focus on continued investment in general aviation’s most extensive product line up. New Citation products coming to market within the coming year include the Citation CJ3+, Citation X+ and Citation Latitude.

More than 6,600 Citations have been delivered to customers around the world since the first Cessna Citation business jet was put into service in 1972. Citations are the largest fleet of business jets in the world and have surpassed 30 million flight hours. You can charter Citation jets from JetOptions.