BusinessAviationVoice: NBAA A Show Worthy of The Hype

In two weeks, 25,000 to 30,000 people will gather in Orlando to attend the 67th annual National Business Aviation Association (NBAA) 65th Annual Meeting & Convention—the largest civil aviation event of its kind in the world. The JetOptions team will be attending the NBAA 2014 convention. But it is not so much the huge attendance that makes the NBAA show such a momentous event—or spectacle, depending on one’s perspective—as its energy level. It is palpable throughout, and it’s infectious.

That energy most certainly will be manifest when the show officially gets under way on Oct. 20. Much of the industry has endured six difficult years of struggling to return to its heady days just prior to 2008-2009, when the worst recession since the Great Depression gripped the U.S. While the industry still has a long way to go, it is making progress, and there is a general sense that the recovery is real and gaining steam.

To its credit, most manufacturers took the long view and continued to invest in new-product development even as they struggled to stabilize their businesses operations in the face of dramatic sales declines, with the exception of the ultra-long-range segment. Products tend to stimulate demand, and there will be announcements at the show of new business jets coming to market.

The aircraft specification is being changed to reflect an increase in range to 2,700 nm at long-range cruise, an increase of 200 nm. Additionally, runway performance is significantly improved with takeoff distance now an impressive 3,668 feet, rather than 4,030 feet in prior projections. 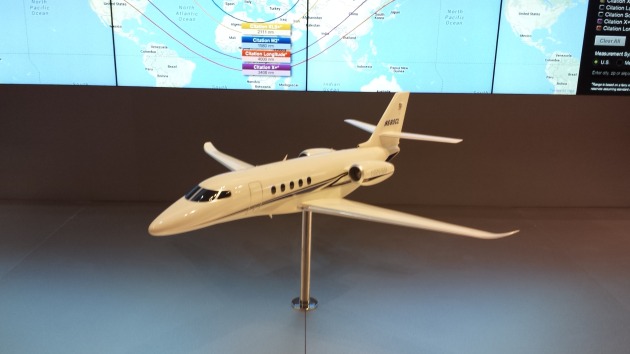 “The Citation Latitude certification program is about two-thirds complete and has hit the mark every step of the way,” said Scott Ernest, Textron Aviation president and CEO. “The entire team is focused on ensuring we exceed customer expectations with the new Citation Latitude, whether in terms of design, production quality, or in making improvements like we’ve seen in the performance numbers.”

The US Export-Import Bank (Ex-Im) could double its $1 billion target to support general aviation through the end of its 2014 fiscal year, says president Fred Hochberg. A $300 million loan guarantee to Minsheng Financial Leasing for eight Gulfstream aircraft in December 2013 was the deal that pushed Ex-Im over the $1 billion threshold, he adds.

While the final numbers will not be in until the export credit agency closes all its commitments for the fiscal year that ends today, it has already closed $1.4 billion to $1.5 billion in general aviation deals since it set a three-year, $1 billion goal in 2012, he says at the International Aviation Club of Washington DC.