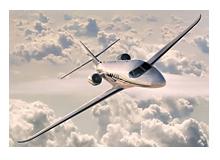 This morning at the NBAA Convention in Las Vegas, Cessna Aircraft took the wraps off a clean-sheet midsize Citation–the 680A Latitude–that will compete head-to-head with the Embraer Legacy 450. The $14.995 million (2011 $) aluminum jet, which is wedged between the XLS+ and Sovereign in the Citation lineup, is expected to fly in mid-2014. FAA certification is slated for mid-2015, followed by entry into service in the second half of that year. EASA certification is expected in the first half of 2016. At first blush the new airplane looks like a Sovereign, but the interior reveals a Garmin G5000 cockpit, 72-inch, flat-floor cabin and larger windows. Powered by a pair of Pratt & Whitney Canada PW306D turbofans, the Latitude will have a full-fuel payload of 1,000 pounds, max speed of 442 ktas at FL350, Mach 0.80 Mmo and 2,000-nm range. Maximum takeoff weight is pegged at “just over 28,000 pounds,” but Cessna is not yet revealing its target empty weight. Flight controls on the Latitude remain fully mechanical (no fly-by-wire), which Cessna justifies by citing simplicity and swifter certification.