Too Much “Iron” On The Market? Forbes Business Aviation

Original equipment manufacturers’ (OEMs) ability to “read” business aviation markets and translate customer preferences into new models—no matter how narrow the niche—is a wonder to behold. They have it down to an art form, not just a science, between the derivatives of in-service models and clean-sheet designs.

But that raises the specter of whether there may be a mismatch between the number of product offerings and the size of the market, making an already challenging environment that much more difficult for all players, as Global Jet Capital CEO Shawn Vick suggests.

A 30-year veteran who has held senior leadership positions at some of the largest companies in business aviation, Vick recalls when OEMs offered no more than about 15 aircraft models in the late 1980s; currently, there are more than 40. “There’s not a bad one in the whole lot, but there is a lot of overlap and even duplication,” he said. “Many of them represent only small incremental step changes in capabilities.”

According to Vick, the fact that multiple OEMs are producing business aircraft with identical or near-identical mission profiles has been a significant contributor to oversupply, depressing both sales and valuations in recent years. “Let’s not kid ourselves—the Great Depression of’ 08-’09 laid bare the actual extent of this problem.” 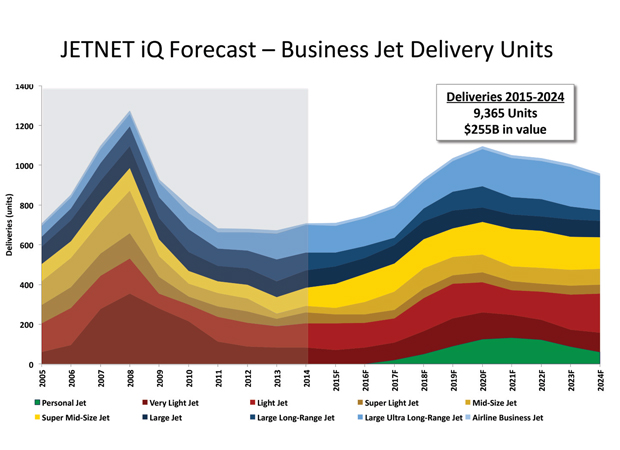 Vick welcomed Gulfstream Aerospace’s decision last month to end production of the G450 in early 2018. (The decision was based on the timing of initial deliveries of the G500, according to Gulfstream.) “We’ll see more airplanes come out of production at all of the major OEMs within the next 24 to 36 months,” he said. He also expects all of the major OEMs to reduce production rates in the near term further. He added that the net result will be “more positive long-term trend lines” in the industry’s fortunes.

Continue reading about the number of business aviation product offerings on Forbes.com->

Colorado-based Boom Technology has unveiled the XB-1 supersonic demonstrator that will be used to refine the aerodynamics and propulsion for a Mach 2.2, 40-seat airliner, and private jet planned to enter service in the early 2020s.

Several concepts for supersonic business jets have appeared since the retirement of the BAC/Aerospatiale Concorde fleet in 2003, but none have yet moved past the drawing board stage. Meanwhile, new regulations restricting take-off noise emissions took effect in 2017, making it even harder for a jet engine capable of supersonic speed to be successful. 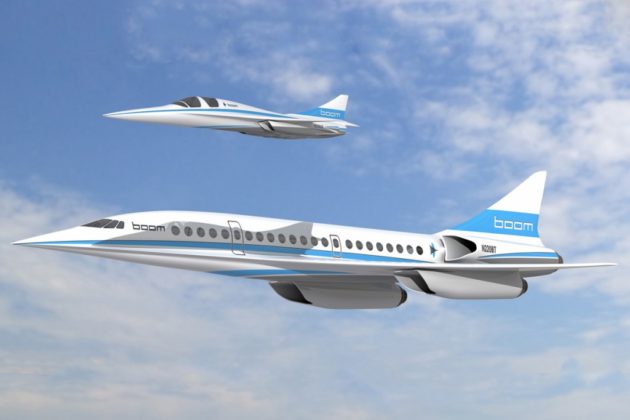 The revealing of the two-seat XB-1 inside a hangar at Denver’s Centennial airport shows the level of the start-up’s ambition. The company already has attracted two commitments for a combined 25 aircraft worth more than $2 billion from Richard Branson’s Virgin Group and an unnamed European airline. The company founded less than two years ago is now in advanced development of a flying demonstrator with registration N220XB, denoting the aircraft’s Mach 2.2-speed goal.

Continue reading about the XB-1 supersonic demonstrator on FlightGlobal.com->

During a speech at NBAA 2016, Peggy Gilligan, associate administrator for aviation safety for the FAA, gave the business aviation community an update on government-industry efforts to improve the fatal accident rate for general aviation flight operations. According to Gilligan, the numbers show safety is improving. Still, the agency seeks more business aviation participation in its Aviation Safety Information Analysis and Sharing System (ASIAS) to improve safety further.

FAA’s Aviation Safety Information Analysis and Sharing (ASIAS) system effectively serves as a warehouse of safety data for airspace users to continually access to improve the safety of their flight operations. Operational data about aircraft accidents and incidents are submitted to the ASIAS system voluntarily by operators, and the agency uses ASIAS to identify systematic aviation risks.

Gilligan told NBAA attendees that the business aviation community’s participation in ASIAS reporting has grown from the first two business operators to bring their data into the program in 2013 to now more than 33 corporate and business operators actively using ASIAS, and the number is growing. The agency believes the more operators submit data, the safer the entire system and its operators will become.

Today, Gulfstream Aerospace Corp announced that the Polish Ministry of National Defense has signed an agreement to purchase two Gulfstream G550 aircraft. The aircraft will be configured for VIP transport and will be delivered in 2017. 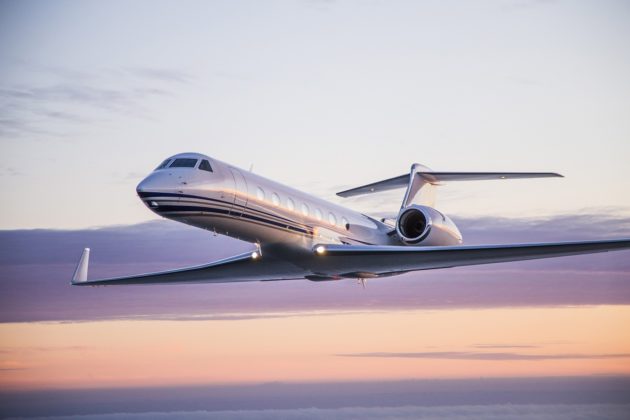 “With its reliability, efficiency, and durability, the G550 is a valuable tool for the Polish government,” said Mark Burns, president, Gulfstream. “Gulfstream has more experience in producing and supporting government and special mission aircraft than any other business jet manufacturer.”

The G550 is the most widely used in-production Gulfstream model for special missions and government applications. The aircraft’s ability to fly long ranges higher than commercial traffic at altitudes makes the G550 ideal for government use. With its 99.9 percent National Business Aviation Association dispatch reliability rating, the G550 also offers dependable transport with low maintenance requirements, regardless of configuration. The cabin’s industry-leading quiet sound levels and low cabin altitude help reduce fatigue among passengers and crew.

The G550 has the most extended range in its class and has achieved more than 50 city-pair speed records. With eight passengers, the G550 can fly nonstop from Warsaw to Los Angeles or Tokyo.

Continue reading about the G550 on Gulfstreamnews->

Embraer announced that its Legacy Family of business jets had set new world speed records, totaling six in 2016. The Legacy 650, Legacy 500, and Legacy 450 have each established new speed records in their classes for continental and transoceanic routes. 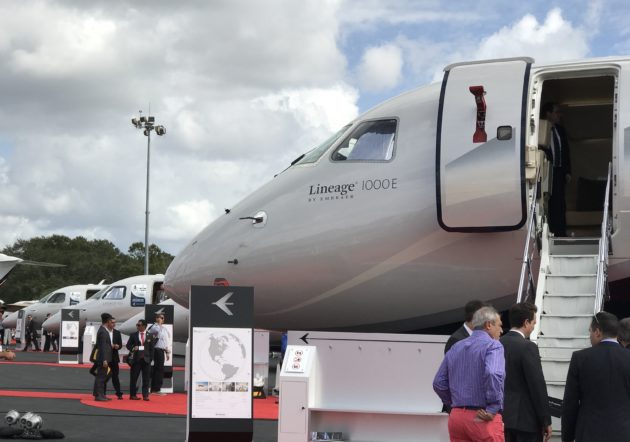 The General Aviation Manufacturers Association (GAMA) has released the third-quarter shipment and billing numbers for the general aviation manufacturing industry.

Worldwide, general aviation airplane shipments declined 3.5 percent, from the same period last year, with 1,504 units shipped in the first nine months of 2016 compared to 1,558 units in 2015. Rotorcraft shipments declined 16.0 percent to 615 units compared to 732 units in the same period last year. Combined airplane and rotorcraft billings were $15.9bn year-to-date in 2016 compared to the previous year’s $19.1bn, a contraction of 16.5 percent.

“There’s no way to sugarcoat the fact that these numbers are not what we had wanted to see,” GAMA President and CEO Pete Bunce said. “Unfortunately, they reflect the instability of the used aircraft market coupled with complicating global economic and geopolitical factors. What is encouraging is that every GAMA airplane and rotorcraft manufacturer has a new product development program recently completed or currently underway, so optimism for the future runs high.

“Now that the U.S. elections are behind us, we look forward to working with the incoming administration and the new Congress, as well as their counterparts across the globe, to highlight the importance of a vibrant general and business aviation industry with manufacturing, maintenance, and overhaul jobs at its core,” Bunce continued. “We also welcome a focus on making critical infrastructure investments, particularly airports and heliports, to support a safe and growing global aviation system. We stand ready to work with elected and appointed officials on policies that facilitate certification reform and product innovation and improve the validation and acceptance of products worldwide.”

Turboprop airplane shipments generated a bright spot in the deliveries with 379 shipments, up 1.3 percent from 2015. Piston airplane deliveries declined from 719 units to 696 units. In addition, business jets slipped 7.7 percent from the same period last year, from 465 units in 2015 to 429 units this year. Piston rotorcraft fell 17.6 percent to 168 units shipped. A total of 447 turbine rotorcraft were sent, a reduction of 15.3 percent versus the same period in 2015.