Business aircraft flying activity in the U.S. fell 2.2 percent in December, compared with a year ago, according to TraqPak data released this week by aviation services company Argus. While Part 91 flying remained in positive territory with a 2.1-percent increase over December 2010, it was not enough to offset the declines of 3.6 percent and 8.4 percent, respectively, at the fractional and charter providers. This also marks the 11th consecutive month of lower flying activity at Part 135 operators. Aircraft category results were generally negative for December; all segments, with the exception of light jets, posted year-over-year decreases. Large-cabin jets, down 6.3, led the decline, followed by turboprops (-2.4 percent) and midsize jets (-2.3 percent). Light jets eked just a 0.6-percent rise in flying activity from December 2010. Looking at individual market segments, Part 91 light jets showed a significant improvement over December 2010 with a 9.4-percent climb; meanwhile, Part 135 jet flying reported the largest drops, with activity sinking in each segment by between 11.1 percent and 12.8 percent. Argus TraqPak data “is serial-number-specific aircraft arrival and departure information on all IFR flights in the U.S.” 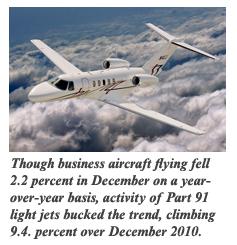