Brazilian tax, police and aviation authorities joined forces to seize nine business jets last week, and they have targeted 13 more suspect aircraft. According to officials, Brazilians allegedly own and use the jets but registered them overseas to avoid Brazilian state and federal import taxes of nearly 35 percent. Foreign-registered airplanes can remain in Brazil for up to 60 days without paying import duties. To build its case, Brazil’s civil aviation agency, ANAC, matched its 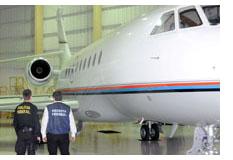 overflight authorizations with Brazilian customs temporary admission permits and Air Force ATC flight plans, while tax authorities monitored in-country flights. The federal police said passenger lists were also tracked. Once they had established usage patterns consistent with Brazilian ownership and use, or even domestic charter operations, officials suspended takeoff authorizations for the targeted jets for 15 days while courts issued seizure orders. Police also took records from a consulting firm that arranged U.S. registrations. Aircraft were seized at Galeão Airport in Rio and at Viracopos, Guarulhos, Congonhas and Jundaí Airports in São Paulo. The jets’ registries were not released, but official photos showed a Cayman Islands-registered Cessna Citation Sovereign that was seized the day after it arrived in Brazil. Universal Aviation’s Amanda Nigro in São Paulo told AIN that none of its clients was affected, adding, “For foreigners coming to Brazil, there should not be a problem.”