Bombardier Aerospace unveiled the full-scale mock-up of its new Global 7000 aircraft during a breathtaking show at the European Business Aviation Conference and Exhibition (EBACE) in Geneva, Switzerland. Global 7000 and Global 8000 aircraft customers were in attendance. JetOptions was in attendance as well and can attest to how impressive it was (see picture below). 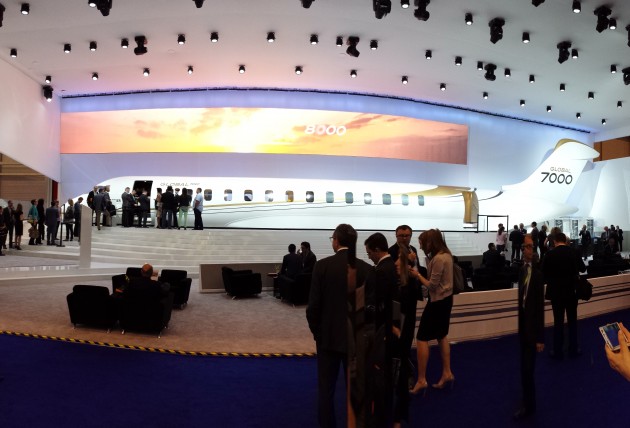 The impressive full-size mock-up, the largest built in business aviation, showcases the aircraft’s unparalleled spaciousness, luxury and comfort. With its four distinct living spaces, including a private stateroom, the Global 7000 business jet will allow passengers to work, eat, sleep and relax in a comfortable environment. This aircraft also features the largest total window area, allowing for more natural light inside the cabin and the state-of-the-art Bombardier Vision flight deck.

“We are extremely proud to present the mock-up of the Global 7000 aircraft here at EBACE, an event that gathers the world’s key players in business aviation. The new Global 7000 business jet’s breakthrough design illustrates how Bombardier is well ahead of the curve when it comes to offering the ultimate level of comfort,” said Eric Martel, President, Bombardier Business Aircraft. “This aircraft is the first business jet to offer a true four-zone cabin to satisfy the increasing travel needs of customers and will offer the most comfortable long-flight experience to passengers and crew members,” he added.

As announced last week, the Global 7000 and Global 8000 program is progressing well in the detailed design phase with the majority of the production drawings already released. The assembly of major structures has started at Bombardier and our suppliers’ facilities.

Launched in 2010 and set to enter-into-service in 2016 and 2017 respectively, the Global 7000 and Global 8000 jets exemplify Bombardier’s visionary thinking. They will have the ability to reach more destinations non-stop than ever before, delivering unprecedented levels of performance, flexibility, and comfort.