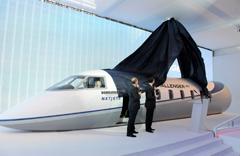 Bombardier Aerospace took the wraps off the Challenger 350–an upgraded Challenger 300 with a new wing, more powerful engines, larger windows and redesigned interior–today at EBACE. NetJets was also announced as the launch customer for the new $25.8 million twinjet, which is $1 million more than its fraternal twin that Bombardier will continue to offer. First deliveries of the new Challenger are scheduled to begin in May 2014. Notably, the Challenger 350 has a new wing with canted winglets that make the wingspan nearly nine feet wider (at 69 feet) than its predecessor. The longer and stronger wing allows both for an increased mtow of 40,600 pounds and more fuel capacity. With the extra fuel, the Challenger 350 has an NBAA IFR range of 3,200 nm versus 3,065 nm on the 300. The Challenger 350’s two Honeywell HTF7350 engines produce 7,323 pounds of thrust each, which is about 500 pounds more thrust than the HTF7000s on the Challenger 300. It also features an entirely new interior that lets even more natural light into the cabin thanks to its 20-percent larger windows. At the front end, the Challenger 350 sports the Rockwell Collins Pro Line 21 Advanced avionics system. Bombardier converted its original Challenger 300 prototype to the full Challenger 350 configuration and has been flying it with these upgrades since March.