Wichita’s future as an aircraft manufacturing hub has appeared less than rosy of late, but the outlook took a turn for the better with news today that Bombardier plans further expansion of its Learjet facilities there. This morning, Kansas Gov. Sam Brownback and Bombardier Business Aircraft president Steve Ridolfi announced the expansion of the company’s flight-test center in Wichita, in addition to establishing a center of excellence for engineering and information technology, adding new facilities for paint and production flight-testing and building a new aircraft delivery center in the self-appointed Air Capital of the World. The expansion, expected to create 450 jobs over the next seven to 10 years, is supported by an incentive offer worth $16 million from the state of Kansas, which will be added to the $600 million investment Bombardier is making to develop the Learjet 85 and to expand the Learjet facilities in Wichita. The Learjet 85, which will be assembled in Wichita, is expected to enter service next year. “Learjet has a rich and solid history in Kansas and we are committed to ensuring that it continues to grow and prosper along with new programs such as the Learjet 85,” said Ridolfi. 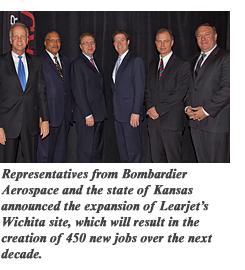