As progress continues on the construction of the first flight-test Bombardier Learjet 85, the airframer said this week that it sees a niche for a smaller follow-on model of the all-composite midsize jet. “I think there is an opportunity between the 75 and the 85,” Learjet vice president and general manager Ralph Acs told journalists this week during a media event. “Our entire notion all along has been that you can come up with a platform and then you spin that to other things.” Bombardier has invested heavily in its composites production facility in Querétaro, Mexico, which supplies 85 percent of the composite content for the new Learjet 85. The fuselage components for the first flight-test airframe, as well as most of those for the complete aircraft structural test (Cast) article, are in the process of being joined at the Bombardier Learjet plant in Wichita. The company plans to have a full airframe assembled and achieve power on by the end of the year. It expects the Learjet 85 to enter service later next year. When pressed for a possible launch date of a smaller derivative of the Learjet 85–possibly to be dubbed the Learjet 80–Acs deferred, citing Bombardier’s already extensive product development schedule. “The point will come downstream where we can have these other conversations,” he said. 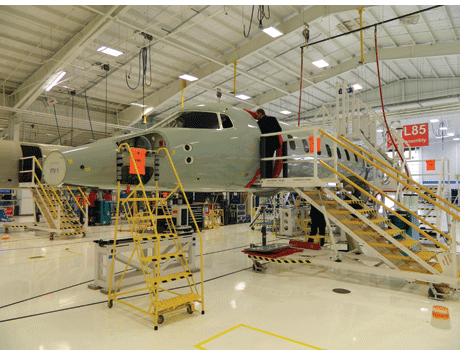