Bombardier and Cessna Win $9.6B Business Jet Order from NetJets

NetJets announced yesterday that it placed the largest general aviation aircraft order in history–for up to 425 Bombardier and Cessna jets worth as much as $9.6 billion. The deal includes a firm order for 75 Bombardier “Challenger 300 series” twinjets, and options on 125 more, with deliveries beginning in 2014; a firm order for 25 “Challenger 605 series” jets, and options on 50 more, with deliveries beginning in 2015; and a firm order for 25 Cessna Citation Latitudes, and options on another 125, with deliveries starting in 2016. NetJets chairman and CEO Jordan Hansell clarified that the Challenger 300-series aircraft will be a derivative “specific to NetJets.” All three aircraft types will be configured as NetJets’ new Signature Series, which “are the first aircraft that NetJets helped design from start to finish,” according to the company, and include “advanced in-flight entertainment systems, quiet cabins and customized seating, lighting and storage features.” According to Hansell, the new jets will serve customers in the U.S. and Europe. Hansell told AIN that the order “nearly completes” the company’s fleet plans, but when asked if there might be future orders announced in the next year or two, he added, “It’s very possible.” 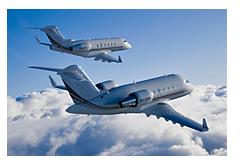