Business aviation in Jordan continues to grow at a modest rate, according to new research commissioned by the Middle East and North Africa Business Aviation Association (MEBAA) ahead of the group’s conference today in the Jordanian capital. The research, conducted by Germany-based WingX Advance, showed that while there has been almost no growth in the number of active and registered business jets in Jordan since 2000, the number of operators in the country has increased at an annual rate of 2.7 percent. On this basis, MEBAA estimates that the industry in Jordan will be worth $1 billion per year by 2020. The WingX numbers show 2.2-percent growth in flights by Jordanian aircraft, giving the country a 6.5-percent share of the Middle East market for professionally operated business aircraft flights.

“We expect little change to the prevailing business jet narrative, which is that demand has stabilized but with only muted signs of recovery,” J.P. Morgan said in its latest monthly business jet report, released yesterday. “Business jet demand has not recovered with corporate profits, as it has previously. We estimate that 2013 U.S. corporate profits were up about 50 percent from the 2008 trough, whereas bizjet deliveries have yet to turn up decisively,”

Keeping a secret as large as a new business jet is not so easy anymore, but on 14 October Gulfstream managed to reel off a handful of major surprises as it unveiled a powered G500 and introduced the G600 inside a Savannah, Georgia, factory-built to produce them. 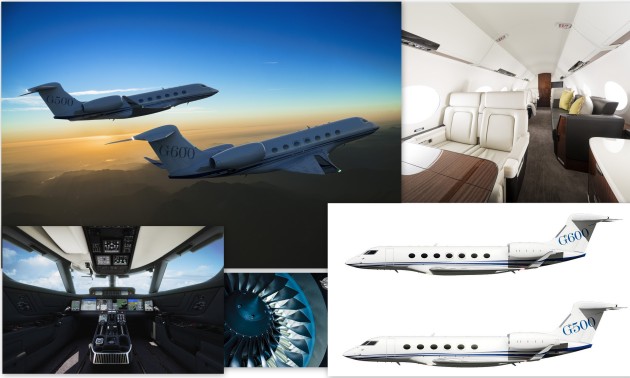 There were, of course, plenty of reasons to suspect Gulfstream had been up to something. References to the “Gulfstream P42” project swirled around the industry for years on supplier LinkedIn accounts and even one EASA annual report. Gulfstream also could not ignore the threat posed by the Dassault Falcon 5X and 8X to its 10-year-old large cabin franchises with the G450 and G550.

But not even a hint had emerged about Gulfstream’s unexpected new strategy. If a P42 existed, it was assumed it would be used to replace the G450, the G550, or perhaps both. Instead, Gulfstream has chosen to subdivide its own large cabin portfolio and keep all four types in production even after the scheduled delivery of the $43.5 million G500 in 2018 and the $54.5 million G600 in 2019.

Gulfstream Aerospace has introduced a new family of business jets: the G500 and G600. The new bizjets can fly 4,800 nautical miles (nm) at Mach 0.90, with a maximum operating speed for both aircraft at Mach 0.925, powered by Pratt & Whitney Canada PW800 engines.

Donated auction items are piling up for the NBAA/Corporate Angel Network Soirée, which will be held at the Hyatt Regency in Orlando, Fla., next Wednesday evening during the NBAA Convention. Aviation-centric items include a Cessna Citation CJ/CJ1/CJ2 initial type rating course at FlightSafety; Breitling and Hamilton watches;

JetOptions is a supporter of the Corporate Angel Network.

The past six years have brought mixed fortunes for business aircraft manufacturers. How are each of the sectors faring, and what new models will this innovative aviation sector bring to the market over the coming years to whet the appetite of discerning customers?

It has been a long and miserable few years for the lower end of the business jet spectrum. The financial collapse of 2008 has been brutal to this huge sector, triggering the disintegration of traditional markets in Europe and the USA, and eroding a long-established and previously flourishing customer base.

This segment – which spans the $2.9 million Eclipse 550 very light jet (VLJ) to the $9.4 million Cessna Citation CJ4 light twinjet – commands a 40% share of the 18,500-strong global business jet fleet, but demand for these models has dissolved since the financial crisis and has yet to recover.