As Hawker Beechcraft moves toward its resurrection as Beechcraft Corp. after exiting bankruptcy protection in the spring, it has not ignored research and development. Today at the NBAA Convention, Hawker Beechcraft executive vice president of customers Shawn Vick announced plans for three new turboprops, one of which will be a single-engine model and another a twin; the third is yet to be defined. The proposed turboprop twin would occupy a market niche between the King Air 90 and King Air 250, said Hawker Beechcraft. A chart showed the other two turboprops filling gaps between the Baron G58 piston twin and the King Air 90. Vick gave the most details about the turboprop-single concept, which would mate a nose-mounted engine with the fuselage of the Premier IA twinjet. Performance expectations and a rendering proposal offered by Hawker Beechcraft showed an airplane seating one pilot and eight to 11 passengers in a cabin 5.5 feet wide, 5.4 feet high and 20.4 feet long. The NBAA IFR range with four passengers would be 1,750 nm and high-speed cruise 302 knots at FL250. The airplane would have a max payload of 2,800 pounds and a full-fuel payload of 1,650 pounds. Also listed, but with no additional details, was a new piston single. 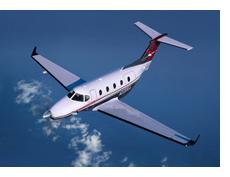