Dassault Aviation has joined the engines, wings and fuselage of the first Falcon 8X, paving the way for initial power-on and the beginning of ground tests.

The 6,450 nm ultra-long range 8X was unveiled at the European Business Aviation Convention and Exhibition in Geneva in May. Due to be certified in mid-2016, it will build on the strengths of the fast-selling Falcon 7X, and will feature the longest cabin of any Falcon, offering customers the most diverse selection of cabin layouts. 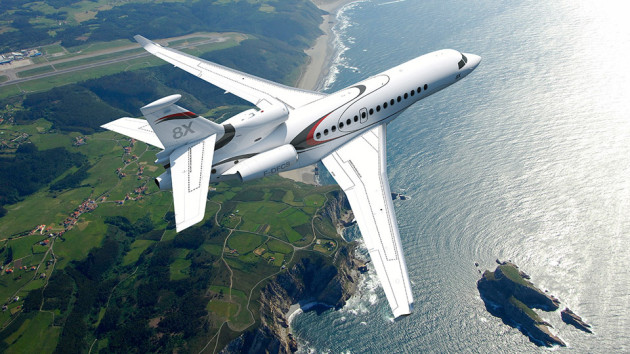 The first 8X fuselage, built at Dassault Aviation’s Biarritz, France facility, arrived at the nearby main assembly plant in Mérignac near Bordeaux in May. The 8X wing, 600 lbs lighter than the airfoil on the 7X, arrived from Martignas outside Bordeaux in June and was mated to the fuselage at month’s end, along with the empennage. Like all in-production Falcons, the airfoil on the 8X features Dassault’s proprietary piano junction design, which gives Falcons advantages in aerodynamic efficiency, robustness and ease of maintenance and repairability.

The Pratt & Whitney Canada PW307D engines, which will provide 5% more thrust than the PW307As that equip the Falcon 7X, were installed at the beginning of July.

First electrical power-on is expected at the end of the month, in line with production and test schedule. The 8X is due to make its first flight in early 2015 and to begin deliveries by the end of 2016.

With the second quarter results for business jet manufacturers being reported towards the end of July, now is a good chance to see how the industry is faring in 2014.

First half business jet deliveries as of 25 July 2014

Every July business jet manufacturers report their delivery numbers for the second quarter, giving a useful reference point for the health of the industry.

As of 25 July Airbus (which reports monthly), Dassault, Gulfstream, and Textron Aviation (Cessna) have reported their figures.

Dassault delivered four fewer Falcon private jets in the first half of 2014 than in the same period of 2013, but its sales were up by 40-percent.

Dassault delivered four fewer Falcon business jets in the first half of 2014 versus the same period of 2013. This is the second in a row that deliveries have fallen in the first six months