Demand for charter flights this month is poised to increase encouragingly, in what aircraft charter operators hope will translate into a prosperous summer season. According to the latest data from online charter portal Avinode, the forward-looking demand index reached 199.45 on Friday, almost 76 points above the beginning of last month and nearly 50 points above where it had been a year ago. JetOptions Private Jets has received an increase of 28% in jet charter quote requests over the same period last year. Anticipated pricing appears not yet to have caught up with this bullish sentiment, with the price index for the 30 days from May 31 moving up only slightly from April 30 in global and North American sectors, and marginally down in Europe. Compared with 12 months ago, the price index was up around the world by between 3 and 5 points. Average flight-hour rates paid in recent months have climbed by almost 10 percent, with greater increases recorded by Avinode in North America. For example, in the three months since February 29, hourly rates for a Bombardier Challenger 604 in North America rose by 8.4 percent to $5,178 on May 31, and by 9.6 percent for a Cessna Citation Excel ($3,463) and by 8.6 percent for a Hawker 800 ($3,636). In international markets, more modest increases were seen for the Challenger and the Citation, while the Hawker’s average hourly rate barely rose from three months ago and was down almost 4 percent from late November.

The graph below represents a broad-based index displaying the average daily order value for flights requested through Avinode’s system, departing within the next 4 weeks. 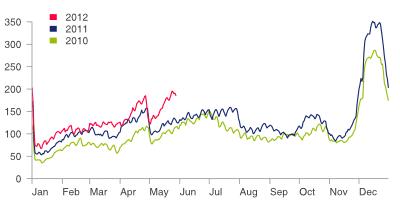