The holiday season has taken off at a run this week kicked off by the Thanksgiving holiday, which takes place on Thursday in the United States. Arguably the largest travel holiday in the US, Thanksgiving has had a visible influence on demand throughout the system.

The effects of the holiday are most noticeable in the US Avinode Aircraft Availability Index, which shows Thanksgiving’s effect on availability. As seen in the index below, aircraft availability drops drastically on Wednesday, the day before Thanksgiving, then rises during the holiday weekend, before dropping again on Sunday, which generally marks the end of a holiday that traditionally lasts throughout the weekend.

The graph below represents a broad-based index displaying the average daily order value for flights requested through Avinode’s system, departing within the next 4 weeks. 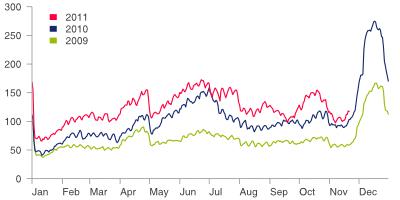