Information collected in-flight on October 29, 2012 and analyzed by a team of National Research Council experts revealed a 50 percent reduction in aerosol emissions when using ReadiJet® biofuel compared to conventional fuel. Additional tests from the static engine show a significant reduction in particles (up to 25 percent) and in black carbon emissions (up to 49 percent) compared to conventional fuel. These tests also show comparable engine performance, but an improvement of 1.5 percent in specific fuel consumption during the steady state operations. The jet’s engines required no modification as the biofuel tested in-flight meets the specification test property limits of petroleum-based fuels.

“We are pleased with these positive results. The flight went smoothly and the data collected enables us to better understand the impact of biofuel on the environment,” said John R. McDougall, President of the National Research Council of Canada. “We will continue to work with our partners Applied Research Associates, Chevron Lummus Global, and Agrisoma Biosciences, Inc. to bring this effective energy solution to market. The final product will be a sustainable option for reducing aviation emissions.”  Alternative Jet Fuel > (PDF) 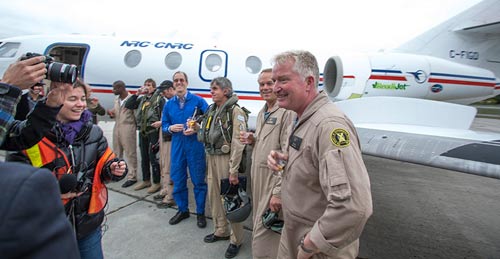